Whilst spending some time traveling around Yosemite National park in CA, and the surrounding areas I came across the Merced River and then discovered the Yosemite Valley Railroad that used to run along its banks.  After buying a book and reading about the fantastic logging history on the railroad I became hooked and wanted to recreate it.

In particular it’s the logging operation which fascinated me and the cars the YV used to transport the huge cuts of Sugar Pine down from the High Sierras to their lumber mill.  The trees were forested by the YLCO (Yosemite Lumber Company) and the Yosemite Sugar Pine Lumber Co. high up in the wooded slopes but the railroad was hundreds of feet below in the gorge carved out by the river. To solve this problem the YV constructed steep incline railroads, one as steep as 78%, that worked by winching cars up and down the steep gorge sides. Although this system could be powered by a steam winch at the top of the incline the majority of the time it relied on the weight of the timber coming down the slope.  A fully loaded log car at the top of the slope was attached to a cable via a special bracket on one end of the car, the cable ran through the winch house and the other end of the cable was attached to an empty car at the bottom via the same special bracket.  As the loaded log was lowered down the incline the empty car was pulled up, and the winch house simply braked the cable.

What made the cars special, apart from the cable bracket, was they only had one bulkhead, at the other end from the bracket.  This bulkhead supported the logs as they were lowered down the incline; this along with the cars being only 36′ long and a light weight construction also made them perfect for running on the temporary railroads laid down by the YLCO and the Yosemite Sugar Pine Lumber Co. through the forests.  The same car could be used from the cutting site through to the lumber mill.

After doing some research I couldn’t find any ready-to-run models or kits for this car in N scale so rather than scratch building them I decided this would be a perfect project for 3D printing.

Using the dimensional information and the many photos from the YVRR book, I was able to draw an accurate 3D model of the car. 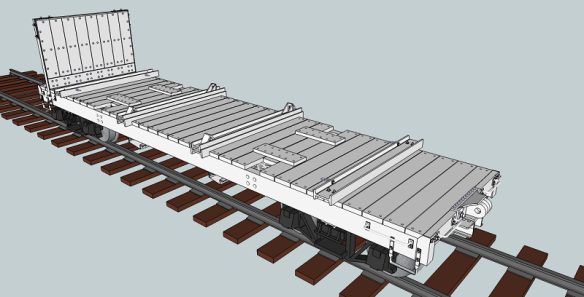 The 3D model contains all of the bolt heads, grab irons and detailed parts I could find in the drawings and photos.  The trucks, for now, are generic models based on Atlas trucks.

Even the underside has been detailed as accurately as I could.

Once complete it was time to think about how to make this into a practical N scale model.  A lot of the detail that has been drawn is unprintable at 1:160 scale, also the thickness of the sheet steel structure will be come too thin.  I spent some time enlarging details and thickening plates until it met the design requirements which Shapeways specify for their FUD material.  This also meant that the grab irons had to go, these are just too small to print and would look ridiculous if enlarged by the required amount.  I left the grab iron mounting plate detail on the car so brass wire grab irons could be added if required.

Details such as the diagonal angle irons which support the bulk head needed to be made into solid triangles, and the gaps between the deck planks needed to be enlarged otherwise they would disappear when the model is painted.

The ends of the deck planks have also been made uneven to give a more realistic look to the car.

The car was now ready for a test print.  In the next post we will see how it comes out.