With all the New Year festivities I haven’t gotten round to painting the new log cars, so for this post I will show you the new DD35 dummy unit which was made available just before Christmas.

When I set out to design and make the DD35 I always intended to have two, as with EMD’s original concept, top and tailed by a GP35 or something similar.  However, as is often the case with model railroading, having all the locos powered in a 4 loco lash-up is overkill, not to mention expensive.  So my second DD35 is to be a dummy unit.

The shell for the powered DD35 was designed to fit over the Bachmann DD40AX chassis so I wanted to design a printable chassis that could be used with the same shell.  This chassis would also incorporate the fuel tank, which was separate on the powered unit, giving it rigidity. 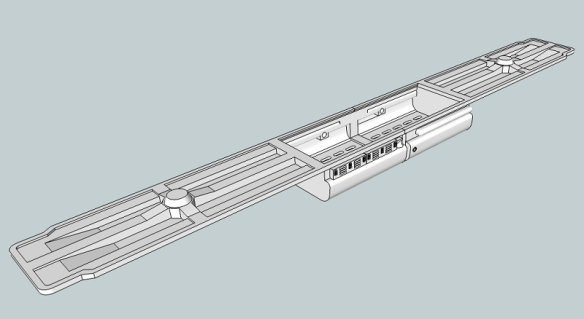 It would have been easy to draw a large flat plate  which would have made it incredibly strong, but also very expensive due to the large amount of material it would need to print it. The challenge was to design the chassis so that it is strong but also economical on material as I intended to print it in the FUD material along with a shell and trucks.

I decided to draw the trucks in the style used on the DD35 rather than copying the DD40AX.  Although this would mean the trucks would look different from the ones on my powered unit I decided it would be worth it because it would be easy to change the truck sides on the powered unit at a later stage.  I originally intended to use Micro Trains plastic wheels with this unit but on reflection I decided to go with Fox Vally 36″ metal wheels; this was because I wanted to add plenty of weight to the unit to withstand locomotives pulling at one end and pushing at the other and figured that metal wheels would run a lot better with this.

As with Bachmann’s DD40AX the steps and couplings are part of the truck, totally non prototypical, but as that was the power chassis I have used, the dummy would have to be the same to look right.  The coupler will be a Micro Trains body mount coupler and a pocket will be provided along with a pilot hole for the screw.  The bolster pin will also be printed and is based on a typical freight car pin.

With the chassis and trucks ready it was time to order the print.  The chassis came out very well and was very strong, and incorporating the fuel tank definitely added to the strength.

The shell which was printed with the chassis is exactly the same as a powered unit. Here you can see it after I had cut out the handrails.

All the parts fitted together perfectly. Next it was time to paint them.

The painting was done by Bob Norris and went very well, the only issue he had was with the trucks.  Due to the FUD material being a bit thin around the neck, which supports the coupling, the end of the truck with the ladders drooped.

This was remedied by installing a strip of metal under the neck of the truck thereby strengthening it.

This has now also been corrected in the 3D model by adding a lot more material in that area, removing the need for a metal plate.  With the correction made it was time for testing and the unit ran very well. After a lap of the layout the FW wheels freed up and spun freely. I think there was still some wax residue it the wheel pocket.

And again with the powered unit, the dummy still needs to be weathered.

And with a cab unit.

These units will be going to the NMRA model show this weekend at Benson, in the UK, working hard pulling trains on the GAMRG club layout. If you’re in the area drop in and come and have a chat.