So now the DT6-6-2000 is all drawn and the test print has been order it was time to think about the dummy version of the locomotive and how I was going to do it.  In this post I will share with you what I have decided to do.

Below is a rendering of the finished shell sat on the Atlas chassis along with the replacement truck side frames. 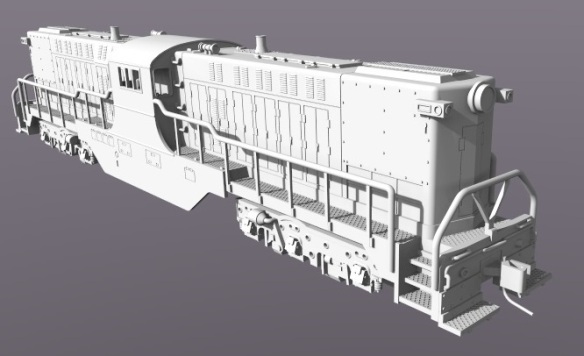 The dummy version of this locomotive needs to look exactly the same as the powered version as I intend to run them together, recreating Mark McDowell’s image in the link below.

The first part to do was the trucks.  Having already created the side frames with all their details and parts for the powered DT6-6-2000, I was able to use the same details for the outer face of the dummy trucks. The inside face of the frames are relatively smooth as they don’t require details, just axle pockets for the wheel sets.  I added the side frames to a similar arrangement I had already used with my UP Water Tenders.  Being a typical draughtsman I don’t draw anything twice if I can hep it.  The trucks for the tenders have evenly spaced wheels so I offset the bolster pin, I did this so the center wheel didn’t need to be removed to install in the pin.  For the DT6-6-2000 I wanted to do the same thing but as the wheels are already unevenly spaced in the trucks this meant the pin could be moved closed to the center of the truck as shown Below. 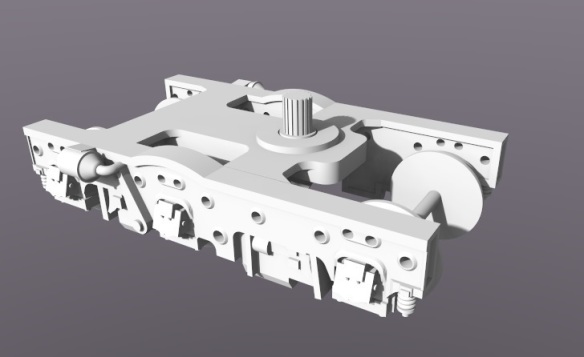 The truck has been designed to take 3 Fox Vally 36″ metal wheel sets (FVM3611), there are no couplings because they will be body mounted on the shell.

The truck for the other end is exactly the same, just rotated by 180 degrees.  As with my other trucks these are only printable in the Frosted Ultra Detail material from Shapeways.  This is because of the level of detail and the thin sections that are only achievable in this material, the bolster pins are also printed in the FUD to complete the set.

For the chassis I decided to make it out of the White Strong & Flexible material as I did with my DDA40X dummy chassis.  Because the DT6-6-2000 has those large side plates that hang down over the fuel tanks and air cylinders there is very little, if any, of the chassis that will be seen once the dummy locomotive is assembled.  WS&F is ideal because it is lot cheaper than FUD, it can be printed in black and it doesn’t need to be soaked in a solution to remove the waxy residue left on the FUD parts.

Although it is not really visible I still like to add what detail I can to parts so I included the fuel tanks and air cylinders to the underside of the chassis.  As you can see from the image below the fuel tank is hollow which allows extra weight to be added.  This will be important as the majority of the locomotive will be 3D printed and it will be very light.  With out the extra weight the locomotive will have a tendency to ride up over the rails and come off the tracks, especially if between the powered locomotive and a heavy train whilst going around a tight curve.

The chassis looks a lot chunkier than the dummy chassis I produced for my DD35 dummy.  This is because the design requirement for WS&F are thicker than FUD, and it also shorter.  I added the lip around the top of the chassis as a structural element, as with the tie across the top of the up stands.  The bumps on the up stands match the dimples in the shell, but rather than move them down for the dummy I left them in the same location, that way the same shell will fit on either the Atlas chassis or my dummy chassis.  Pictured below are the finished trucks and chassis, they will fit inside the shell using the same fixings and lugs as the Atlas chassis uses.

And together the dummy and powered DT6-6-2000s should look something like this.

The dummy is in the front, without the fuel and air tank detail on the dummy chassis there would be a big void under the locomotive from this angle.

The test print for the shell is due to arrive this week so in next post I should have an actual model of the DT6-6-2000 to share with you.