The Rapido coupling has been an industry standard for more than 30 years in both N scale and N gauge and in this post I wanted to share with you some of the things that can be done to make your older British rolling stock with Rapido couplers look comparable to the new NEM coupled stock.

The majority of American N scale modelers and manufacturers have moved away from the Rapido coupling in favour of knuckle couplings from companies like Micro-Trains, formally Kadee.   British N gauge modelers and manufacturers are now also moving away from the Rapido and using NEM couplers from companies like Dapol and Graham Farish.

The classic Repido pictured below is a very simple but extremely functional coupler.  It allows trains to navigate very tight corners whilst remaining strong and reliable. 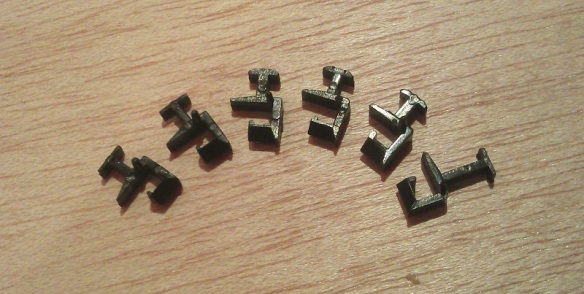 Because Arnold-Rapido, the inventors, allowed the design to be freely copied by other manufacturers it soon became the standard for the scale.  As shown above there are many variants to the design but the fundamental parts are all the same. Up until recently Rapido was the industry standard but now technology has moved on and manufacturers have started to introduce new coupling designs which look like the real thing in size and shape.  Initially the new design of couplers still used the Rapido socket and often new rolling stock would come with Rapido couplings installed with the new design coupling in the box to be installed if required.  Now a lot of manufactures only have their new style of couplers fixed to the rolling stock.  With new British stock even the socket has been updated to the new NEM standard socket although the actual Rapido coupling is still in use.

The biggest immediate difference between Rapido and NEM coupled stock is the gap between them.  Below is a photo of some British N gauge coaches made by Graham Farish,  the red GUV or mail express system coaches behind have the traditional Rapido couplers and the Pullman coaches in the front have the new NEM couplers. 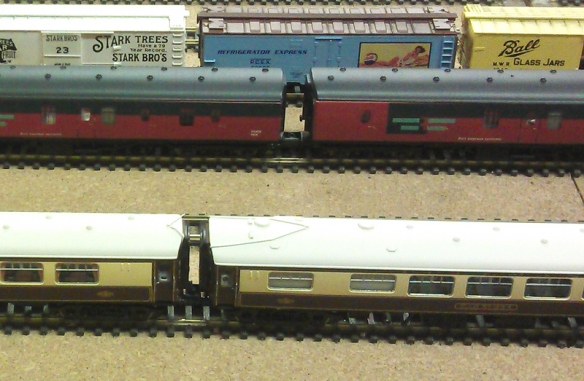 There has to be some gap between the coaches to alow them to navigate corners without becoming buffer locked.  This is when the buffers on the corners of the coach touch each other and prevent the body of the coach from swinging.  With full size trains this is not an issue as the buffers are sprung allowing the buffer to compress and the coach corridor connections to touch.

My first solution is to use my fixed link couplings, pictured below. These fit into the standard Rapido socket on two coaches permanently coupling them together.

By using a shorter fixed link the gap between the coaches is reduced, as shown below.  This is ideal for connecting locomotives together, particularly if they share a DCC decoder as with my E7 DCC conversion, but it is not so good for lots of coaches.

For short trains with three coaches or less this would work well but for longer trains with, say ten coaches, it would be very hard to transport them if they were all coupled together. 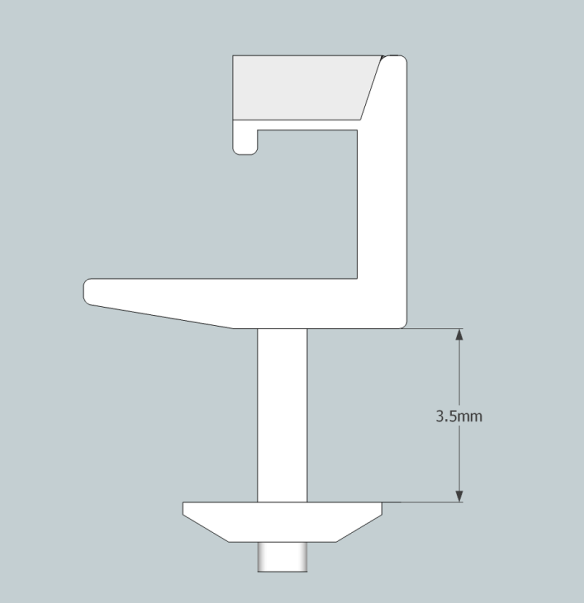 So I re-drew the Rapido in a range of lengths decreasing by 1/2mm at a time. 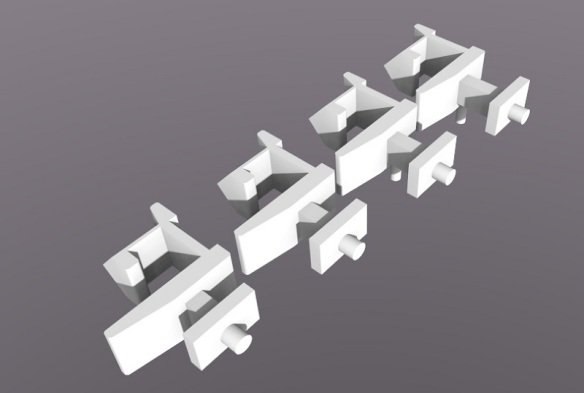 Because I wanted these to be cost-effective they have been designed to be printed in the Black Strong And Flexible material offered by Shapeways.  This has three main advantages over the Frosted Ultra Detail material in that it doesn’t need cleaning on arrival, it is already black so they are ready to use right out of the packet and it’s cheaper.  The BS&F material does have a rough finish but this just helps to make them look a bit more realistic.

The first test prints have arrived from Shapeways and have already been successfully tested with Graham Farish coaches.  Although I ordered the full range of sizes all the coaches we tested worked best with the smallest coupler which has a shank length of only 1.5mm. Using a pair of these couplers, one in each coach, it reduced the gap between the coaches by 4mm which in N gauge is a lot.  Below are the same Graham Farish GOV coaches as pictured before but the pair on the left have the new 3D printed Rapido couplers installed.

The difference was considerable but a test on a corner was required to check for buffer lock.  We used one of the tightest corners on the club’s N gauge layout for the test and as you can see below it was successful.

Below is a close up on the original Rapido couplings. 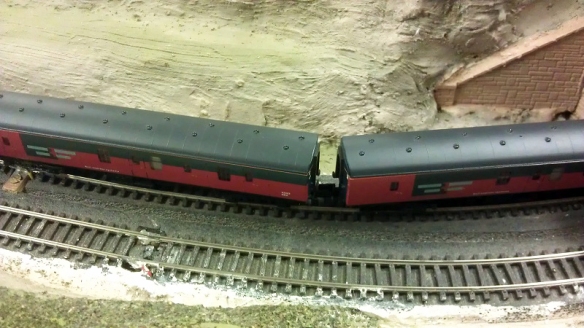 And below is a close up on the new 3D printed short Rapido couplings.  You can see that the buffers don’t actually meet. 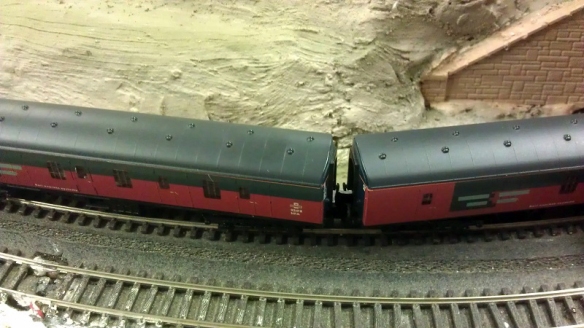 And a close up of the 3D printed ones.

The 3D printed couplings still need to go through a few more tests and I have also made a few tiny improvements to the design to help with the fit into the Graham Farash coaches.  Once complete I will make them available to buy, and I will also offer them for sale in packs of 20 direct from this site.

One of the tests currently going on is looking to see which length 3D printed couplers work best with an N Gauge HST set, but that will have to wait for another post.