In my last post I shared with you the designs for my HO Scale Union Pacific auxiliary excursion train water tenders; you can find that post here.  Since then the test print has arrived and in this post I’ll show how it came out and the few improvements I have made.

As shown below the kits arrived from Shapeways with the Frosted Detail parts in a transparent form covered in the waxy residue left over from the print process. 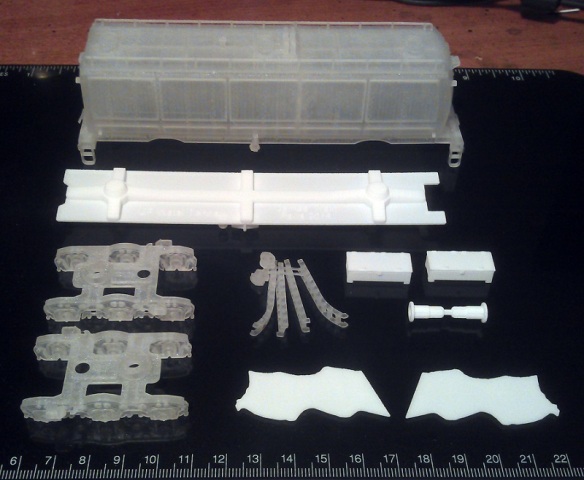 I cleaned the parts using Goo Gone to break down the wax, however with this kit being HO it is considerably larger than my normal N Scale parts so a bigger container was needed.  An ice cream tub works very well for this as the lid can be sealed; the Goo Gone will evaporate if it is in an open container.  And I can strongly recommend honey flavour! 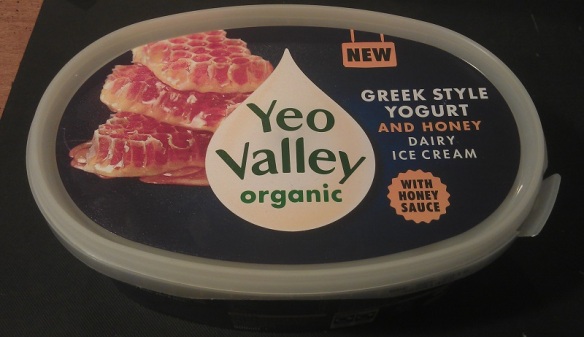 Only the parts printed in FD needed to put in the Goo Gone, the White Strong & Flexible material does not print in the same way and has no waxy residue.

After the cleaning process the FD parts turned opaque and the detail could now be seen as shown below.

This is my first print in the FD material and it came out a little bit coarser than the Frosted Ultra Detail.  This particular model also had a lot more wax build up than I am used to which left a lot of powder on the model from the wax residue, and this needed scrubbing off with a toothbrush.  In the photos below you can still see a lot of the powder around the detail. 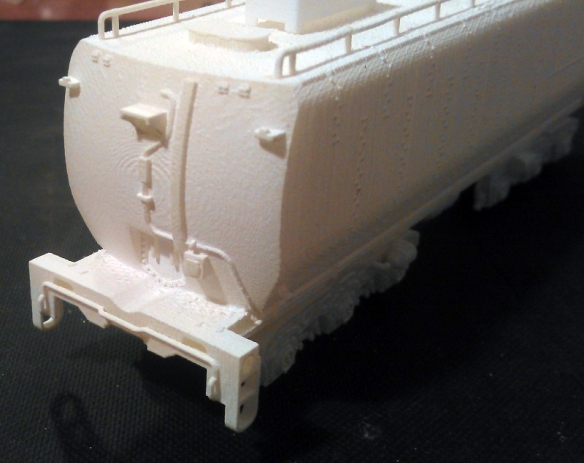 Below you can see the trucks have powder in the holes, clogging the detail. 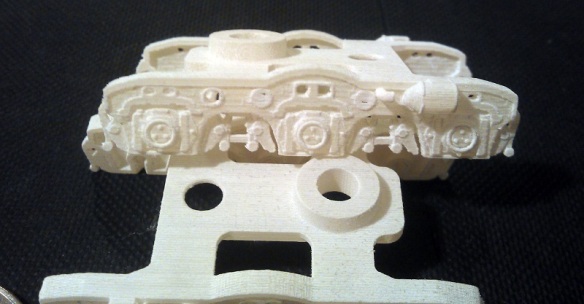 Most of it was easily removed using a toothpick and a toothbrush but there is still more to remove. 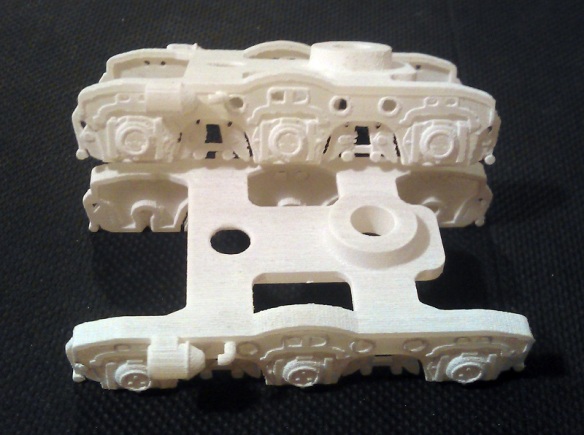 The trucks have been designed to be used with Proto 2000 Wheels as shown below but the distance between the truck side frames is a little too tight so for the test print I have had to use plastic wheel sets from some old box cars.  This has now been corrected in the 3D model as well as the gap you can see between the air cylinder and the pipe.  I have ordered a test print of the new trucks for this model to check the Proto 2000 Wheels work. 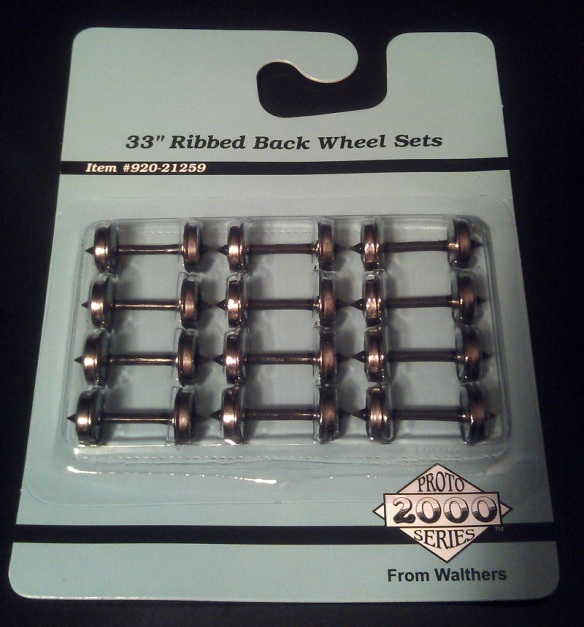 As with the N Scale kit the ladders are tied together on a ring which also has the head lamps attached to it, as shown below.

The chassis, tool boxes, flag plates and truck bolsters were all printed in WS&F and all came out well.  The bolster pins are fixed together to help reduce the number of small parts and can easily be cut apart.

The holes in the chassis for the pins needed to be very slightly drilled out to allow the pins to be a good fit.

The detail on the tool boxes came out very well in the WS&F, it had the level of detail necessary for this part. 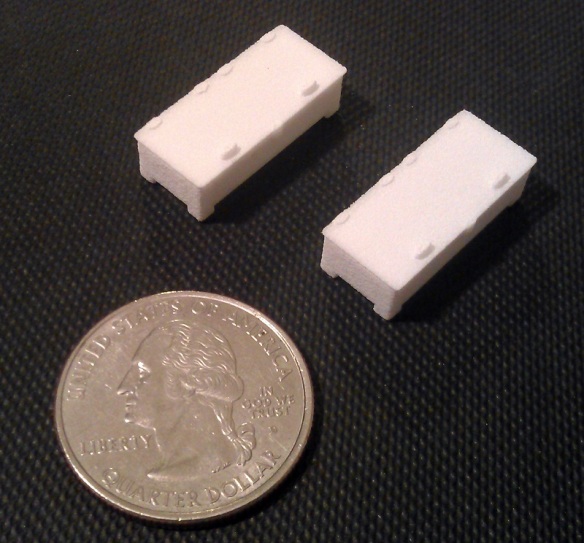 The chassis fitted into the shell a little too tightly so I have also altered the shell in the 3D model at one end to make for a better fit.

The chassis only fits in one way as each end has a different shape which fits around the coupling connection mounts.

Each end of the shell has two pegs to mount a Kadee coupler; I have used No.5 couplers. 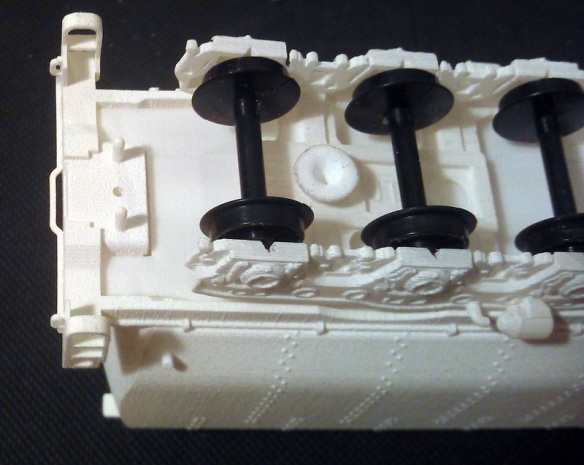 The tender still needs some more checking over before I am happy to release it and I also want to check that the new trucks work with the Proto 2000 wheel sets but I think it is just about there. 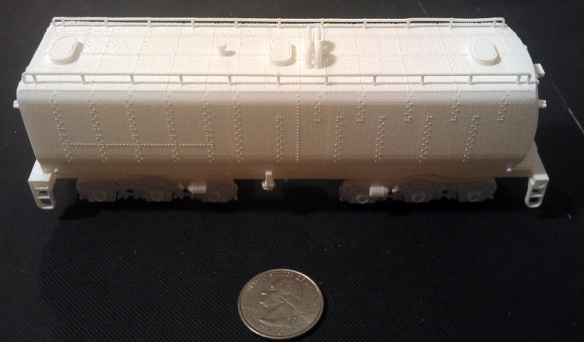 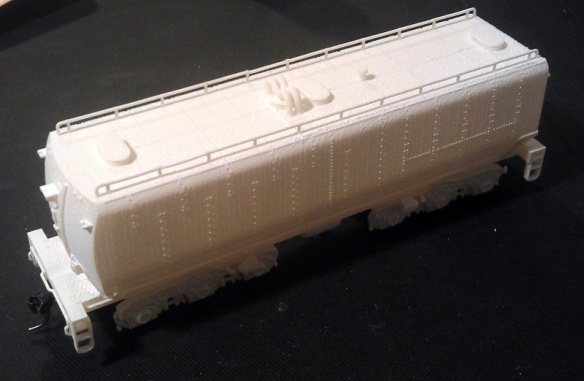 As I have already said in the previous post the cost of printing in the FUD material led me to test print in the FD material to make the model more wallet-friendly. Having assessed the overall finish of the FD test print the finish is a bit rougher than the FUD so when I do release the tenders for sale I will make them available in both materials to give you the choice.

In a later post I will show you what the FD HO tender looks like painted in the UP colors.