Earlier this year I shared with you my designs for a shorter coupling to replace the standard Rapido coupling. You can find the post here. The idea was to bring rolling stock closer together to increase the realistic look, in particular this was aimed at an N Gauge High Speed Train (HST) set.  In this post I will show you how the HST set looks with all eighteen couplers replaced.

The HST or Intercity125, as seen here, is a very iconic British train. First introduced in 1975 and with a top speed of 148 miles an hour it is still the world record holder as the world’s fastest diesel-powered locomotive or train.  Although several are now approaching 40 years old many have been re-powerd and refurbished and are still in regular revenue service.  Originally they were all owned by British Rail but since the privatization of the railways they can be seen in a variety of colors and liveries around the UK.

The HST has two power cars, one at each end, and eight or sometimes nine Mark 3 coaches between them.  The whole set is coupled together with US style buckeye couplers, as shown here, and flexible corridor connections, as shown here.

Models of this train in N gauge have been made by several manufactures and improved over the years.  Graham Farish is one such manufacture and it is their HST in CrossCountry livery that I have used to test the first set on. 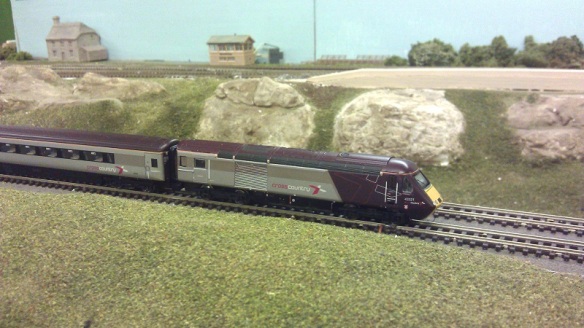 As a comparison I have used a second HST set in First Great Western livery, shown below, with standard Repido couplers.

Starting in the storage siding I lined up both HST sets; this clearly showed how reducing the coupling lengths not only closed up the gaps between the coaches but also reduced the length of the train.

The new couplings fit into the existing Rapido socket and work in the same way. Below you can see how far the original Rapido couplers protrude from the First Great Western set.  Oddly enough the First Great Western set also have buffers on the ends of the coaches; this is actually a mistake as the HST sets do not have them.  Almost all English rolling stock does, or did, have buffers, but as the HST sets only run in fixed rakes and only use the buckeye couplers, buffers are not required.

Because of these buffers, using the new short couplings with the First Great Western set might cause a problem commonly known as buffer lock. This happens as the coaches navigate tight corners and one buffer rides over the other: when the train returns to the straight track it can not pull the buffers apart.  To solve this problem the owner of the First Great Western set is going to remove the incorrect buffers before he fits the new short couplers.

Up close the difference is very clear to see and this improvement to the coaches makes them look far more realistic.  It would be possible to close the gap even more but this would prevent the coaches from going around any corners at all.  As the coaches enter the corner the gap on the inside of the curve will close up, the tighter the curve the more gap you need.  The CrossCountry HST set has been tested on the tightest corners on the Poole & District Model Railway Club’s N Gauge layout without any issue.

These 3D printed couplings will also work with standard Rapido couplers because they are exactly the same shape.

To show just how good the overall effect is, here is a short video on the CrossCountry HST running in the Poole & District Model Railway Club’s N Gauge test track.

Here is another video showing both HST sets crossing the bridge.

The 3D printed couplings are available in Shapeways Black Strong & Flexible material, as shown in the examples above, and the Frosted Detail Material.  With the BS&F they are ready to use right out of the packet although they do have a slighty rough finish which I think makes them look better.  The FD couplings will have a smoother finish but they will need to be cleaned and painted.

They are currently available in two packs

Here’s one more short video of the CrossCounty HST dashing through the countryside.

Next week I will be back with the HO Scale Union Pacific water tender project and hopefully I will be able to share with you some photos of the painted car.