In this week’s post I am continuing my overview of the layouts at this year’s NMRA (BR) convention which was held in Bournemouth last weekend.  You can find the first part here.

The first layout for this week is Drew, Iowa.  This is a HO club layout built by the South Shore Group.

“Rural railroading in deepest Rural Iowa, it’s continued existence is due to the grain and feed elevators at one end of town. Drew, Iowa represents a small town on one of several branch lines running aimlessly through Granger Country waiting for the axe to finally fall. In the meantime it struggles to run short trains up the overgrown dilapidated track. Currently running in a Milwaukee Road guise; buildings are either heavily weathered kits or scratch built to suit. The track was laid like that on purpose. (Honest – track that bad takes a lot of care to lay to be effective – more time than well laid track!) (X2014 News, NMRA (BR) Convention Guide, 2014).

The track work really is superb on this layout, not only because it looked so dilapidated but because it ran so well. 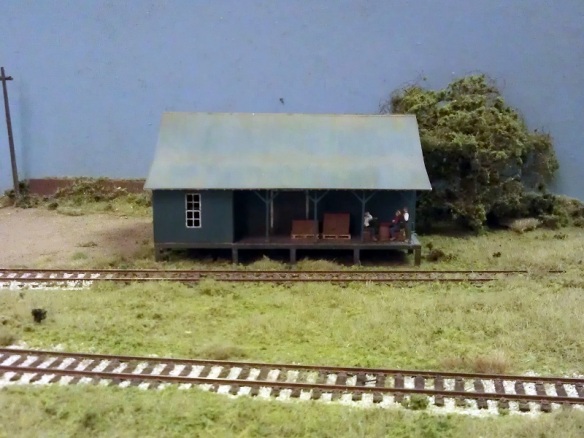 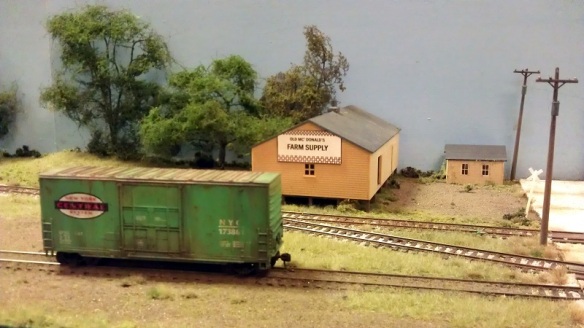 I should also mention Andrew Dunn, who built the beautiful Stout Oak, Iowa (which I featured last week) is also a member of the South Shore Group and at the age of 17 built this layout as well,  the group has since added to Andrews master piece giving us the fantastic layout we have today. You can read more about the group and their layouts here.

The next layout is Sumach Grove, an On30 layout built by John Levesley.

“Sumach Grove is my first go at O scale 1:48th railway modelling. Its a fictional narrow gauge railroad with a 30” Gauge located in the NW N Carolina, E Tennessee, Virginia area of the USA in the 1930s, based on a place I’ve never been at a time before I was born. The two volumes of “Slow Trains down South…. Daily ‘Cept Sunday” by Mallory Hope Ferrell, Thomas Fetters two books on “Logging Railroads of the Blue Ridge and Smoky Mountains” and “Extra South” by H Reid have been the main inspiration for the line. It is (or when fin-ished will be) a railroad of the deep South.

The location is Sumach Grove on the Sandford and Sumach Grove RR. S&SGRR trains are usu-ally local way freights and the occasional passenger railcar. Additional rail traffic can be either mineral workings of manganese or felspar from North Bend Mining, or timber traffic. Mimick-ing a real life practice in the region, narrow gauge mineral and timber cars are loaded piggy-back onto standard gauge flat cars for transfer to mineral processing plants and sawmills down the valley. Buildings and structures will be in a transitional phase. Some I’ve bought second hand to use until stored craftsman kits are completed, some are mine, some are even scratch built.

The six modules can also be operated as a switching layout which is how (at the time of writing) I anticipate it will be operating at the Convention. Control is by a Gaugemaster and MRC DCC system, turnout switches are thrown using Blue Point switches to operate push rods. Operation is directed by a switch list.”(X2014 News, NMRA (BR) Convention Guide, 2014). 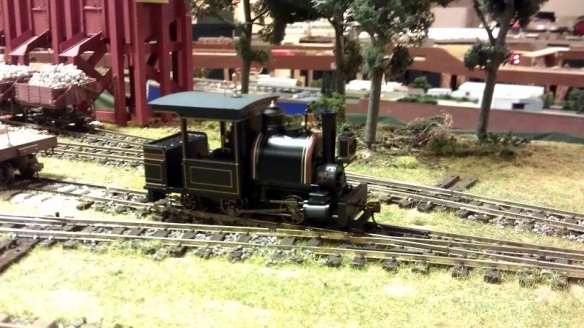 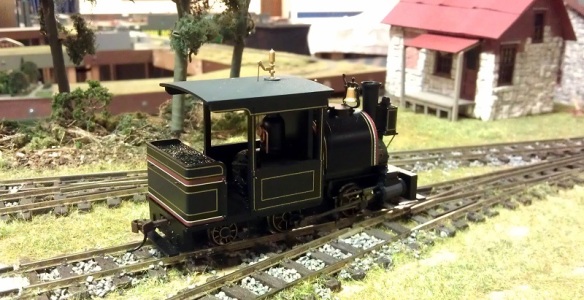 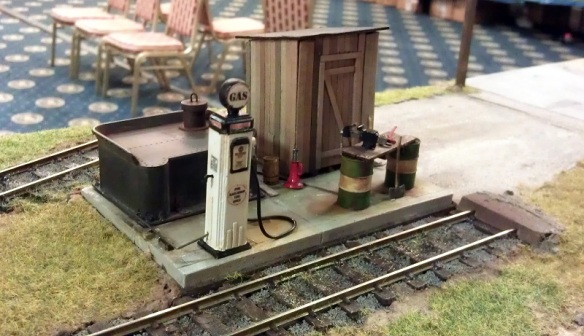 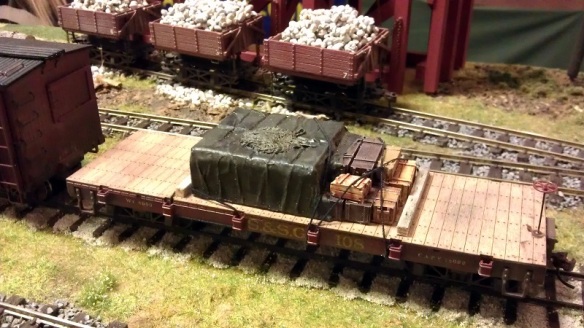 And what 1930s narrow-gauge railroad is complete without a Shay locomotive?! 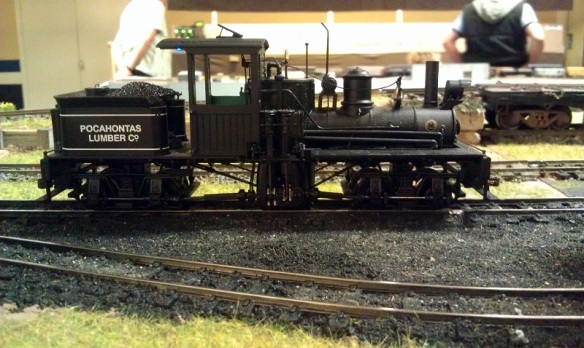 You can read more about John Levesley’s Sumach Grove here as well as finding some more, and better, photographs, including photos of the layout from its start.

The Bearwood Group’s HO Modular Layout is the last layout for this week. 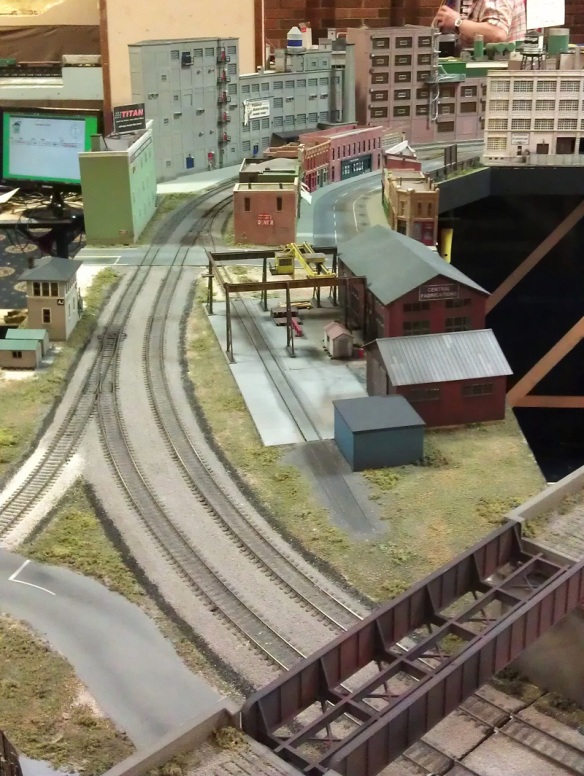 This modular layout consisted of a nicely modeled city scene and large mill in an industrial area.  The majority of the running on this layout took place while I was giving my clinic on 3D printing so I missed most of the action but I was able to get a few trains.

This crane is fully DCC controlled with moving jib and rigging. 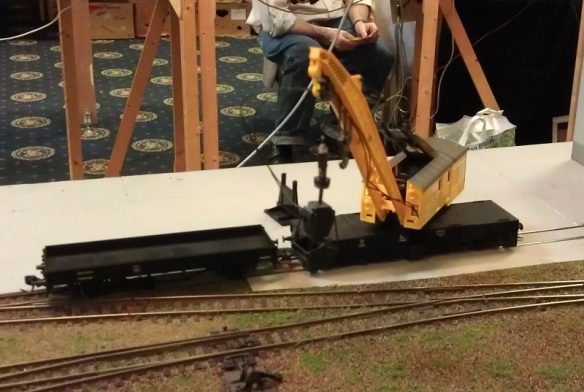 I was also able to catch a Warbash streamliner as it streaked though the city.

This layout also had an interloper; my 3D printed Re-Built UP excursion train tender behind a huge Gas Turbine.

Here is a comparison between the correct tender and mine.  Mine was sprayed with Flowquil’s UP Armor Yellow paint but I think it’s a bit too yellow although I’m very pleased with the overall tender.  Even the brake wheel printed crisply.

The tender coupled up perfectly and ran smoothly as you can see in this video.

In next week’s post I will show you the last four layouts from this year’s NMRA (BR) convention.  This will include the largest layout as well as a truly spectacular Hon3 layout and two fantastic HO switching layouts.