With the launch of my most recent locomotive shells, the Baldwin RT-624 and the popular Baldwin DT6-6-2000, there must have been a lot of surplus shells left over from the donor locomotives.  In this post I will share with you a new product that will allow these spare shells to be used.

The shells on these locomotive are very nice and it would be a shame not to use them.  The huge fuel tank and truck side frames are also not required as donor parts which means the bulk of the locomotive is intact.  Here is the locomotive disassembled.

Re using the trucks or side frames would be a bit tricky as they are designed to clip onto the Atlas power truck but the main shell and fuel tank can easily be reused.  For this a chassis is needed.  For my DDA40X dummy chassis I used Shapeways White Strong & Flexible material as it has a low-cost for volume and that a was big chassis.  That dummy chassis was fairly simple and did not need a lot of detailed sections so the courser WS&F was not a problem.  For the C-628 chassis I will be using Shapeways Frosted Ultra Detail material.  This is because it allows for very accurate detail and that will be needed to replicate the same fixings points used on the original chassis.

To start I used the 3D model chassis I created to fit the DT6-6-2000 shell on to, as shown below.  The chassis is modeled at the right hight from the rail head and I have included all the groves and bumps.  The C-628 cab fits over the lower section on the left.  The fuel tank clips onto the horizontal slot as well as having fins that fit into the vertical slots, they are not centered so the fuel tank will only fit on one way round.

Next I created a chassis model using as little material as possible whilst retaining the strength, the material is not as cheap as the WS&F and very light so there in nothing to be gained by bulking it up at this stage.  Weight will need to be added but as the fuel tank is hollow, with a bottom, it can be filled with scrap bits of metal.

Next we need some trucks. I copied the side frames from the atlas trucks, and added a bit more detail from photographs of the real locomotive as shown below.  The raised section around the hole is the pivot point where the bolster pin passes through the truck.  Normally the pivot point is in the middle of the truck or over the center axle, but this would create two problems.  Firstly the center wheel set would need to be removed every time the truck needed to come off and secondly as the truck rotated it would hit detail which hangs down from the atlas shell.

The underside of the truck has four sets of forks sticking out of the middle.  These have been designed to allow 1mm phosphor bronze, or similar, metal strips to be fixed to the truck and make axle wipers.  The forks stop the axle wipers from touching the wheels and causing a short circuit.  The forks can be seen in the image below as well as a slotted hole in front of the bolster pin hole.

The image below shows the ‘H’ shaped set of axle wipes fitted to the truck as well as the wheel sets, I am using Fox Valley metal wheel sets that have one insulated wheel.  The two outer wheel sets pick up power from one rail and the middle wheel set is electrically neutral.  The wipers are made from four strips of phosphor bronze and once soldered together will be glued into the truck. 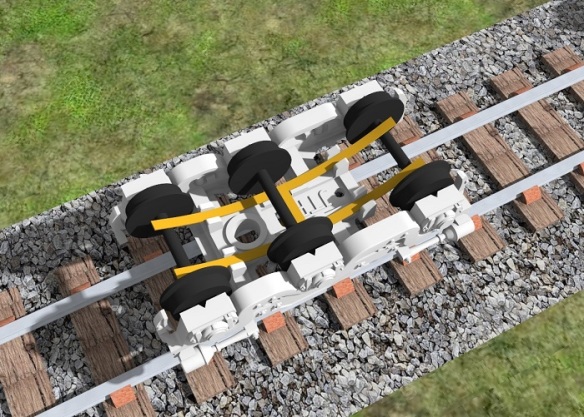 With the truck set back on the track you can see the fourth strip of phosphor bronze poking through the slotted hole, the bolster pin is also visible in the image below although it would drop out of the real truck without being pushed into the chassis.

Both trucks are the same but as they are asymmetric one is rotated by 180° as you can see below.  There is a crescent slot at each end of the chassis to allow the phosphor bronze strip to stick up without preventing the truck from rotating

You may be wondering why I have added electrical pickups to a dummy locomotive, well as all of my DT-6-6-2000 and RT-624 locomotives have been converted to DCC the old circuit boards are also surplus.  I intend to use some of my dummy C-628 locomotives as pushes on the rear of long trains and they need to have lights.  As the circuit board puts the mounted LEDs in the right place it makes sense to use it.  However as you may remember from the view of the 3D modeled power chassis the circuit board sits along way up from the top of my 3D printed chassis. To solve this I have designed a pair of circuit board clips as shown below.

These are printed in Shapeways WS&F material so they are really cheap, they are designed to clip together holding the circuit board in place, then they clip into the 3D printed chassis as shown below.

The last thing to do is run a wire from the phosphor bronze strip to the power connection on the circuit board.  If run as is on a DC locomotive the lights would work just as they did with the power chassis fitted.  If the polarity of the wires is reversed and the LEDs swapped for red ones this will work as tail lights.  A DCC light decoder could be fitted or even a sound decoder.

I have already printed this dummy chassis and it was fairly successful, the issue I had with the kit was some of the detail on the truck was catching some of the detail on the shell.  With a bit of cutting and filing the problem was solved.   Here it is pushing behind a long coal train on Ant Quinlan’s wonderful layout, Horsethief Bridge, at the NMRA (BR) convention 2014.  You can read more about the layout here.

Until the alteration was made, it struggled on tight curves but that was soon fixed, Ant and I also experiments with adding weight to the shell, we found 3 bolts was just about right!

The added weight gave the dummy stability and it tracked round the layout well.  Below is a video of it running behind the coal train as a pusher.

And here is another video of it working as a mid train helper.  Ant’s rolling stock was all weighted so there was a fair tonnage being pulled through the dummy locomotive but it did the job without trouble.

Since the first 3D print was tested I have corrected the issues with the clashing details and fine tuned a few other areas.  The next 3D print has been ordered and should be here later this week.  In a later post I will show you step by step the assembly of the axle wipers, adding weight, painting and finishing the dummy locomotive. The dummy chassis kit will then be made available for anybody that wants to use their spare Atlas C-628 and C-630 shells.