For this week’s post, being the first post in 2015, I thought I would take a look back over the 3D printed and brass products from last year.

The year started with the completion of my N Scale EMD DD35 locomotives as pictured below with a U50 and GP38.

The kits were released in both powered and dummy versions, the powered unit uses a modified Bachmann DD40AX chassis, below is a before and after photo of the first modified chassis.

Further development of the chassis led to the central corridor also being cut out, as shown below, to match the corridor connection in the 3D printed shell.

This greatly improved the realistic look of the locomotive. Below is SP no. 9902.

The final improvement to the DD35 kit was the introduction of my etched Brass Additions for this locomotive.  This composed of a full set of etched brass handrails, as shown below. 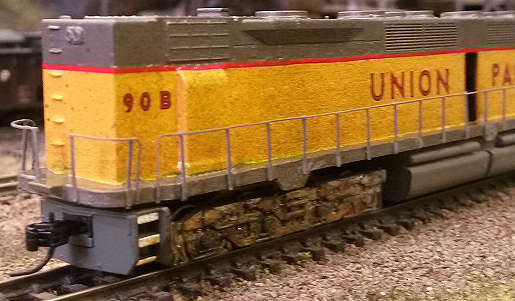 The first run of DD35 brass Additions were made from 8 thou brass and although they were made to exact scale sizes this did make them a little hard to work with.  The later sets of brass are made from 10 thou brass and look even better as well as being easier to handle.

Both versions of the DD35 can be found here, and an instruction sheet showing how to modify the DDA40X chassis can also be found here.  I have 10 thou sets of brass Additions available for this locomotive so if you would like a set please get in touch through the contacts page.

To make use of the spare Bachmann DDA40X shells that were left over from the DD35 builds I also released a DDA40X dummy chassis.

It was designed to clip into the Bachmann shell and to utilize the spare fuel tank which clipped on to the new chassis.  This particular model also received axle wipes to collect power for the circuit board.  Below is a video of the dummy DDA40X running on the back of a coal drag with working lights.  Note the DD35 running as the third powered locomotive.

My next kit to be released was my N Scale Union Pacific Excursion train water tenders.

In each configuration there are two body styles; with the rebuilt tenders this is simply the inclusion of flag plates on one of the tenders, whereas with the pre rebuilt set the piping configuration is different, as with the prototype and shown below.  The tender on the right has more piping on the roof. 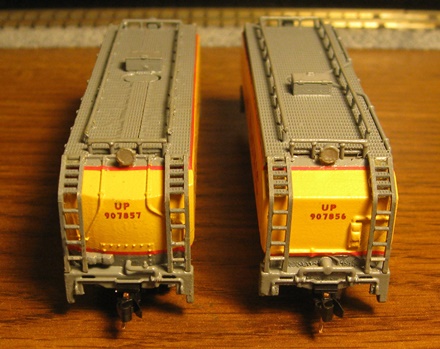 Later in the year I also released the rebuilt tenders in HO Scale, as shown below.  As HO is lot bigger I was able to add a little bit more detail. The HO kit comes with all the same parts as the N scale ones, just bigger.

This then led to even bigger things; O Scale!  Below are all three scales together. 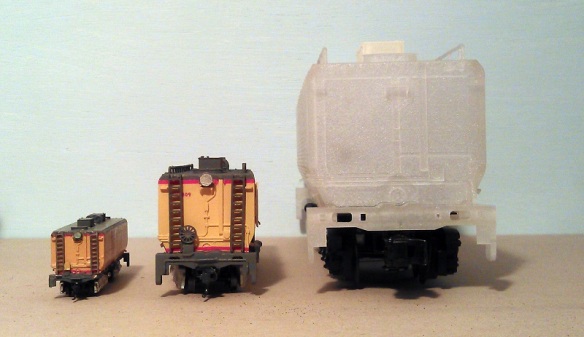 The O Scale kits are almost ready and will be available very soon and the N scale and HO Scale kits can be found here.

As well as big projects last year I also did several small detail items.  The first was my steel dog house kit to be used to add detail to steam tenders.

This design is for the dog houses used by the Norfolk and Western on their Y6b locomotive tenders as shown below.

The dog house kits can be found here and are available in different quantities.

The next big project was another N scale diesel locomotive, this time a Baldwin DT6-6-2000.

This kit is designed to drop onto an Atlas C-628/C-630 chassis without any modifications required, except for rotating the trucks. The kit includes the main shell, handrails, engine crew with cab interiors and replacement truck side frames as shown below.

Although this locomotive was designed on the configuration used by the Atchison, Topeka & Santa Fe Railway, some modelers have done their own thing with it. 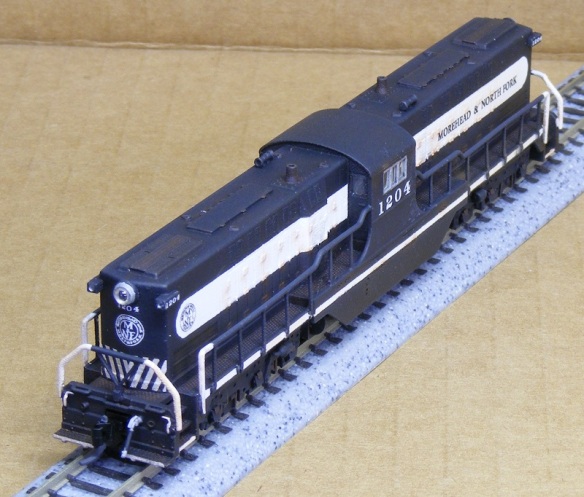 This kit is also offered with a set of Brass Additions which include handrails and sun shades as shown below.  This set was also first offered in 8 thou brass and has since been upgraded to 10 thou brass giving a better look and feel.

Below is a work in progress photo by Brian Stewart showing the brass handrails prior to painting.

There were lots of small changes made to the model but a few of the bigger ones included the addition of a replacement fuel tank, new style trucks and the extra brass Additions, particularly the famous Penssy Train Phone Antenna.  The brass etched details for this kit are made from 12 thou brass and look fantastic.  Below is a work-in-progress shot of Chris Broughton RT-624 with the brass parts added. 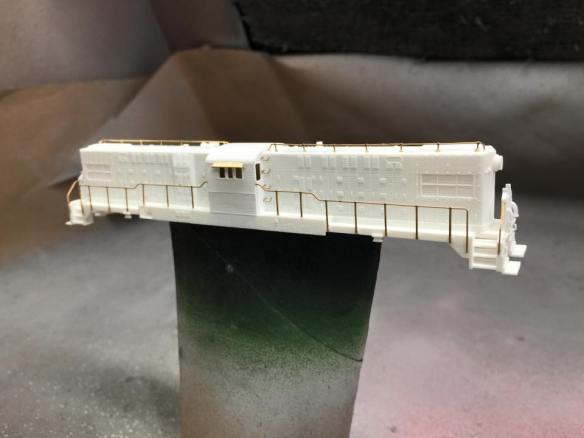 And here is Chris’ finished locomotive.

I also made some replacement parts for damaged locomotives last year, the first was a new drive shaft for one of my MRC/Roundhouse 2-8-0 steamers. 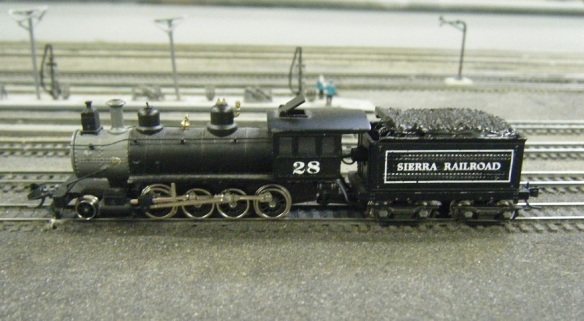 The replacement part consisted of a new drive shaft directly replacing the original, which had been lost at an exhibition.

This also led to a replacement drive shaft kit for the N Scale Atlas 4-4-0.

This replacement kit also contained the connecting parts at either end of the drive shaft as shown below.  These were the parts which had split on this particular locomotive.

Another replacement part was for my N Scale Rowa/MRC Y6b steam locomotives.  As standard these don’t have a working front coupling or pilot and I wanted to double head mine so I released a replacement front pilot which could be fitted with either a Z or an N Scale Micro-Trains coupling. 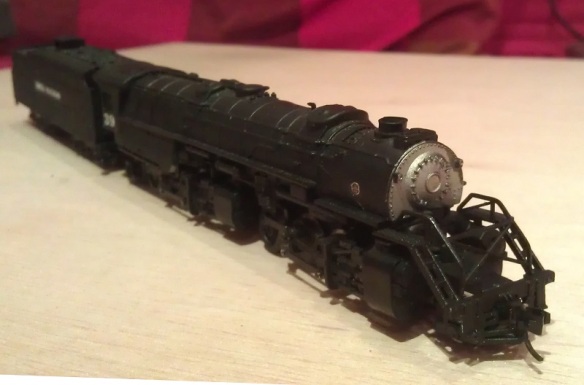 The kit makes the front pilot totally functional without affecting its cornering abilities.  Below is a short video of a pair of Y6B double heading round a very tight curve.

Both the Z Scale and N Scale coupler versions of the N Scale Y6b replacement pilot can be found here.

These are designed to replace Rapido style couplings but leaving the rolling stock permanently coupled together as shown below.

This is particularly useful for locomotives which are permanently consisted together such as the set of three Con-Cor E7s pictured bellow.  They all share one DCC decoder and have wires running through the corridor connections. To ensure they don’t come uncoupled and pull on the wires I have installed my fixed link couplings.

The fixed link couplings are available in a variety of lengths and quantities and can be found here.  If you require a different length or quantity please contact me though the contact page and I will be happy to add them to my shop.

The replacement short Rapido couplings can be found here.

Some of my smallest 3D printed items from last year were my N Scale super detail re-railers as shown below on the truck of a GP20 and hanging under a FA2 locomotive.

A replacement part was also needed for one of my favorite locomotives.  My N Scale Con-Cor 4500 Gas Turbine.  As delivered this model has a fuel tank instead of the correct battery box between the trucks so I have made available a replacement part that simply fixes on with the same screw. 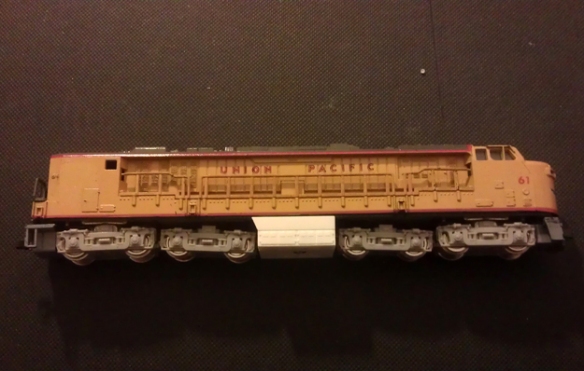 The battery box for the 4500 Gas Turbine can be found here.

To find out more about any of the parts and kits I have touched upon you can use the search facility at the top right of the screen at the end of the menu options.  This will lead you to all posts about a particular part or kit and you’ll find a lot more images, videos and information.

As well as all these new 3D prints I also visited and exhibited at several model Railroad/Railway exhibitions and conventions around the UK, here are some of the ones I covered in posts throughout the year.

And that just about wraps up 2014 for James’ Train Parts.  2015 is going to be an exciting year with many new parts and locomotives coming out as well as developments in the 3D printing world in general. And there’s some great exhibitions coming up, including the NMRA(BR) Convention at the former signalling training school in Derby.

My first big project for this year, as some of you may have guessed, will be the massive Alco C-855 in N scale which I am greatly looking forward to and this engine will also have etched brass Additions and will be available in both dummy and powered versions.

Thank you for following what I’ve been up to in 2014, and I hope you’ll enjoy the New Year with me.