One thing I enjoy making on my model railroad is mountains with tunnels and bridges.  And for that you need a lot of rock.  In this post I am going to share with you how I make my own rocks, boulders, outcroppings and cliff faces.

The rocks I am currently making are for a modular N Scale layout but this process can be used for any scale.  And as with most things in model railroading there are hundreds of ways to do the same thing. This method is just one that I have found which works for me.

I have been asked in the past why I don’t use actual rocks on my layout.  The answer is that real rocks are very heavy and may not be the right colour for the scene that I’m modelling.  And they can be very hard to shape!  The weight is less of an issue for small areas on a fixed home layout and I have used them before, but for modular layouts the lighter you can make them, the better.

To make my rocks I use plaster or filler, depending on where you buy it from.  Different makes of plaster can effect the outcome so it’s worth thinking about what you will be doing with the rocks.  I have used the cheap powder filler from the local DIY store; this goes a long way but is fairly heavy when dry and again for modular layouts this is not so good.  Woodland Scenics make a product called Lightweight Hydrocal, pictured below, which is a plaster that sets fairly quickly and is very light.  This is ideal for rocks and I use it for most of mine.

To cast the plaster into rocks I use moulds.  I have a few commercially available rock models; mine are also made by Woodland Scenics.  They are made of rubber and are designed to be strong enough to be self-supporting but flexible enough to take out the plaster when dry without breaking the rock, although that is a common occurrence. Below is a typical Woodland Scenics mould.

Even though the moulds are reasonably strong with all the added weight of the wet plaster the sides can droop and if you are not careful the fluid plaster will spill out.  To prevent this I sit the mould on a bed of scrunched-up newspaper so, as the plaster is added, it settles down into the paper without tipping over.

The Hydrocal is very easy to mix. I use an old plastic bowl and wooden spoon.  First I add the plaster, about one and a quarter cups.  Then I add half a cup of water.  I mix all the powder in until the whole mix has the same consistency which only takes about a minute.  Then it’s ready to pour into the mould.  I would not recommend making bigger batches as the plaster starts to set fairly quickly and if you need to stop mid pour it might go off in the bowl.

The plaster sets in about an hour but I tend to leave it overnight as it can be a bit soft if removed too soon and breaks easily.  When it is properly set it will be hard and dry. Below are some rocks cast in the mould above. 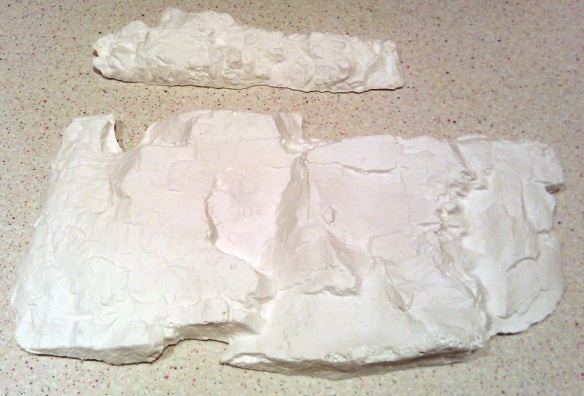 This is a great way to make rocks but there is a drawback.  If you are putting a lot of rocks in one area you soon run out of different types.  You can use the same rock several times by changing the direction but it can start to show.  Also, having used my Woodland Scenics moulds many times I am very familiar with the rock shape and can easily spot them on other exhibition layouts.

To get around this and to add diversity to my layout I have made my own rock moulds.  This is not as hard as it sounds and Woodland Scenics provide the tools for the job.  They make a liquid latex rubber which can be painted on to real rocks to make a mould.

I collected a selection of rocks based on shape and texture that I wanted for my layout.  I washed all the rocks to remove any dirt and loose material from the surface. 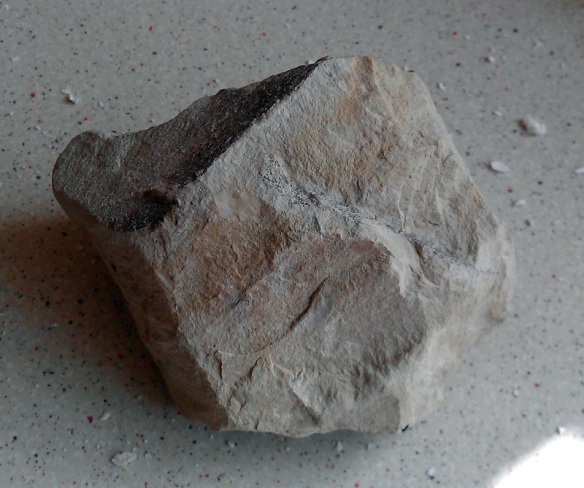 Then, once dry, I painted a fairly thin coat over the rocks top and sides.  A bit of preparation is a good idea when doing this, mainly making sure you have somewhere to put the rock down once you have painted it and also having some water or even better a sink near by to wash off the brush and clean up if required.  Dont expect to use the brush for anything else after this as it will become a rubbery lump.

Making the first coat thin is necessary to ensure the latex gets into all the detail on the rocks and to prevent any air bubbles from getting trapped under the latex.  It also helps the latex set quickly.  I would also recommend only doing a few rocks at a time so the latex in the jar does not start to form a skin.

Once the section of rock I required was covered I placed it in a foil tray to set.  The latex rubber is white as it comes out of the pot but turns a translucent yellow as it sets. 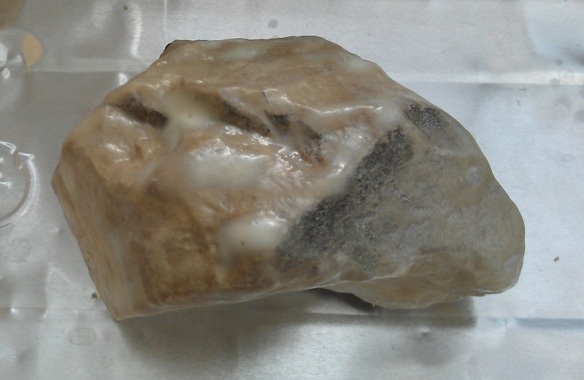 Depending on the thickness the latex will take about half an hour to an hour to set.  Then another coat will need to be applied.

About three to four coats of latex rubber is required to create a good strong mould.  To make a very strong mould layers of gauze can be placed in-between the latex layers; but so far I have not had the need to do this.

Once the final layer has set, I tend to leave this overnight, the mould should then be a uniform colour.

The mould can be peeled away from the rock.  This can be started by rubbing the edge with your thumb. 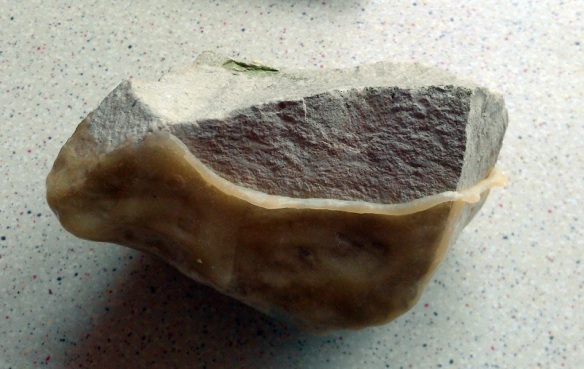 Once the edge is lifted all around the mould it should peel away completely.

The mould is then ready to be used to cast a rock.  This particular mould only had three thin coats of latex and will need a little support to keep the same shape as the rock. This is actually a good thing as with out the support the mould will flex in a different direction every time I use it, giving me a slightly different rocks.

The plaster is mixed and poured in the same way as before and the final result is a rock similar to the original just as I wanted.

This method can be used on any surface that has the texture you want for your rocks.  Below I have a section of bark collected last year from a tree.  Now that it has fully dried out I will use it to make a mould. 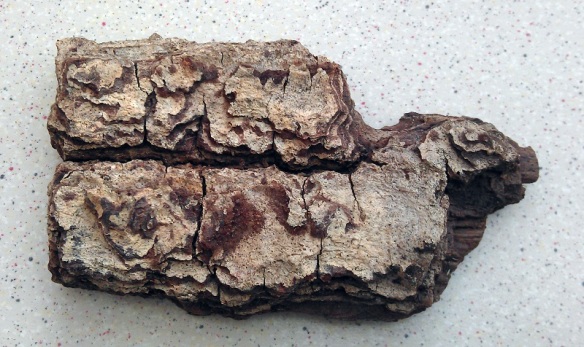 Again the first layer of latex wants to be very thin as the bark details are fragile.

Once all three layers had set I removed the mould and poured in some plaster.

The latex did pick up some of the bark material which consequently ended up in the rock but that doesn’t mater and will blend in nicely when I colour the rocks. 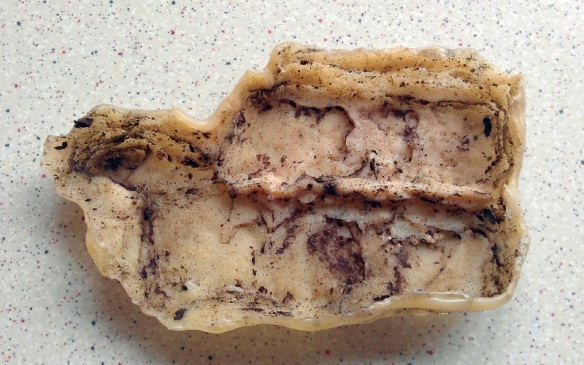 I have used this process on large and small rocks with great success.

Now that I have a big pile of light weight rocks and boulders it’s time to fix them to the layout and colour them, which I will cover in a later post.