As well as 3D printed models I do a lot with DCC and model railroad wiring.  Recently I have been building computer controlled DCC layout and this adds a whole new level of requirements to the layout such as circuit detection.  In this post I will share with you how I get rolling stock ready for circuit detection on an N Scale DCC layout.

Circuit detection is fundamental to computer control as it tells the computer where trains are on the layout.  It is also useful if you have hidden sidings and you want to know where your trains are.  There are several companies that produce circuit boards for circuit detection and on this layout I have used Digitrax’s BDL168 boards.  The boards work by measuring a resistance across the track; this can be anything from an LED to a DCC chipped locomotive.  So if you have a locomotive in a section connected to a BDL168, even though it’s not moving, the board will detect a resistance and turn on the output for the section.  The output could be connected to a display panel or a computer could pick it up through the Digitrax Loconet system.

This is fine for locomotives and rolling stock with illumination but what about basic freight cars or wagons?  The computer controlled layout I’m building is a British outline model railway and has a lot of coaches that will all need to be modified so the circuit detection can pick them up.  A lot of the coaches, as shown below, are made by Graham Farish and luckily have metal wheels, obviously plastic wheels sets are no good for circuit detection.. 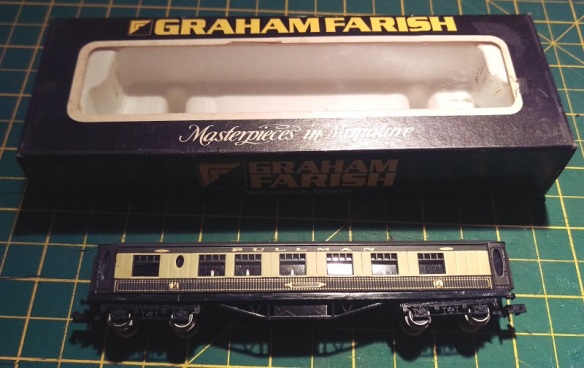 If you do have rolling stock with plastic wheels you can get replacement wheel sets for just about all ready-to-run stock.  Although metal wheels usually run better you don’t have to change all the wheel sets for metal ones, only the ones you intend to modify.  In fact you only need to modify one wheel set per item of rolling stock.  Because of the length of the coach I am going to modify one wheel set in each truck.  If it was a short wagon I would only do one.  Ideally I would like to modify the two outer wheel sets but as the axle is so close to the coupling box there would be no room.

Adding lighting to the coach would be one way of creating a resistance across the coach but by far the simplest way is to add a resistor to a wheel set. 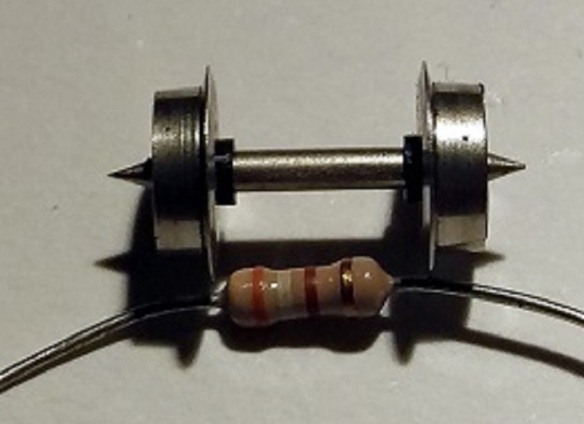 As you can see from the images above with N Scale, and OO/HO, a standard resistor is a bit big and would be very impractical.

To overcome this, tiny resistors called ‘Chip Resistors’ are available, and are also very cheap to buy.

The best size of resistor for this job is a 10K Ohm.  The Ohm rating is the measurement of resistance and it is important to get this correct as the wrong resistor may cause heat which might warm up the wheel set and melt your train.  The chip resistors are usually supplied in strips as shown below. 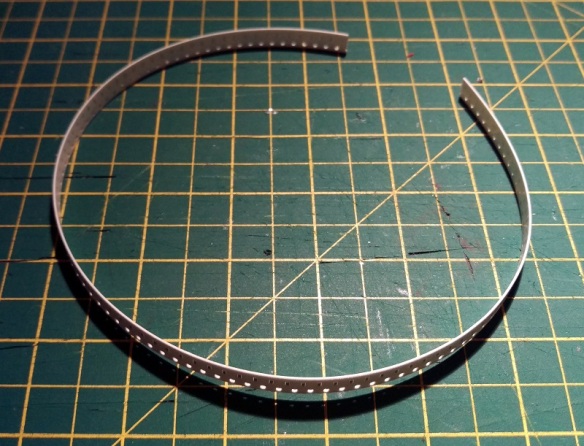 Close up you can see the tiny chip resistor, each one is in a pocket in the strip and covered by plastic film. 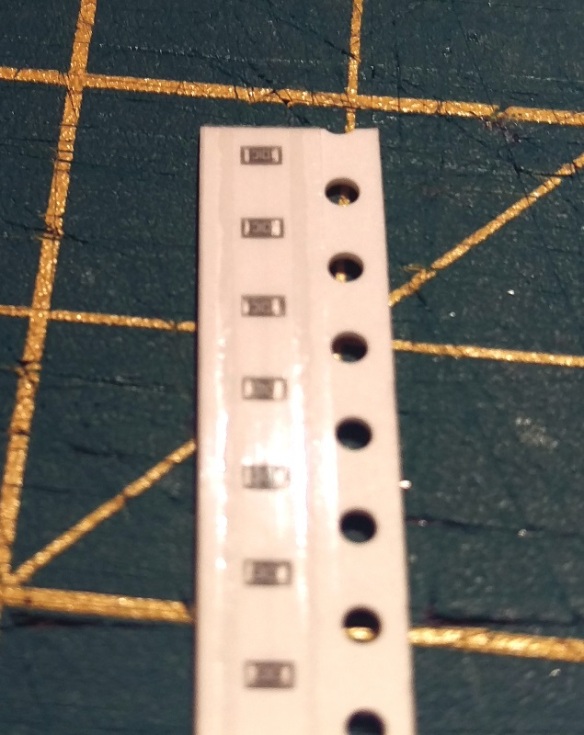 Below is a comparison of the strip with an N Scale 3 axle tender truck. 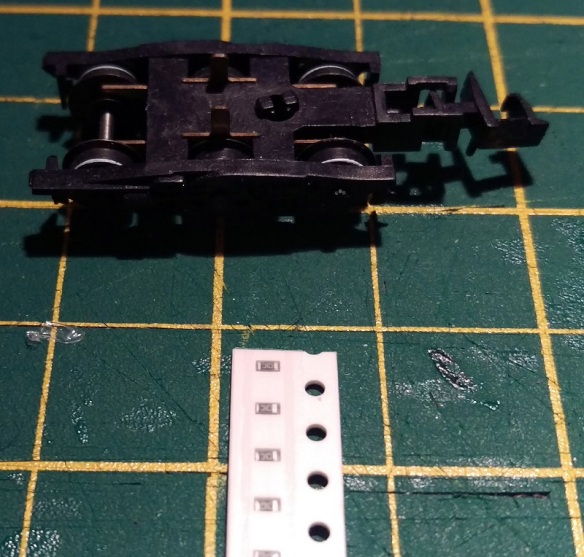 Once the chip resistor is popped out of the strip you can see just how small it is. 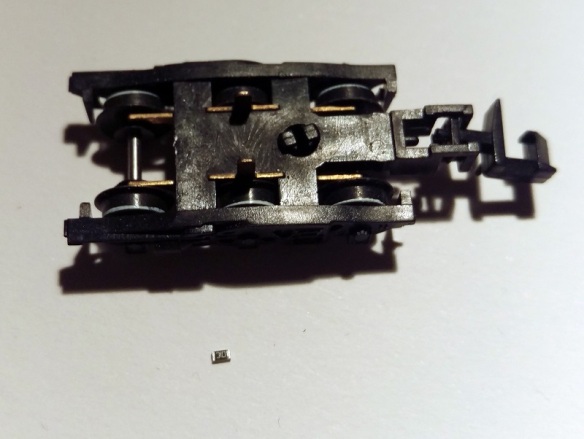 And immediately you can see the advantage over the traditional resistor. 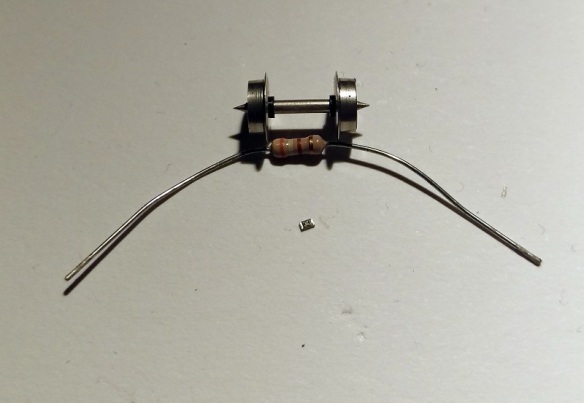 The next issue is how to fix the resistor to the wheel set.  If you attempt to solder it on I guarantee it will go wrong.  The heat from the iron will heat up the wheel set and melt the plastic spacer between the wheel and the axle.  This will cause the wheel to become out of line and wobbly.  It may even cause a direct short across the wheel set.  The other option is to glue the chip into place.  This also has a few problems because if you get glue between the metal contact of the chip and the wheel or axle, the chip will not be able to conduct electricity.  To overcome this I have used Wire Glue made by Anders Products. 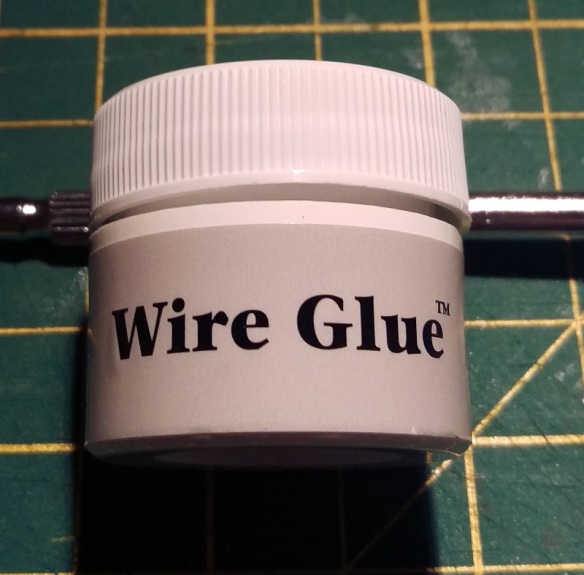 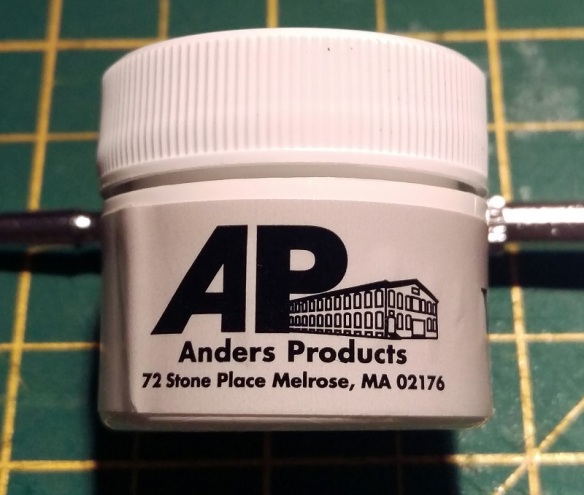 This is glue that has been designed so once it sets it will conduct electricity.

Unlike superglue or CA the wire glue needs time to dry, normally overnight, and that means it needs to be left where it won’t be knocked or moved.  Sitting one of those tiny chips on an axle that rotates is not very practical so I pop out the wheel sets and gently hold one of the wheels so the set can’t roll over.  Make sure what you are using to clamp the wheel set is not too strong as you don’t what to damage the wheel.  I would also recommend checking the wheel centers are correct before gluing the chip in as you won’t be able to move it once the glue has set. 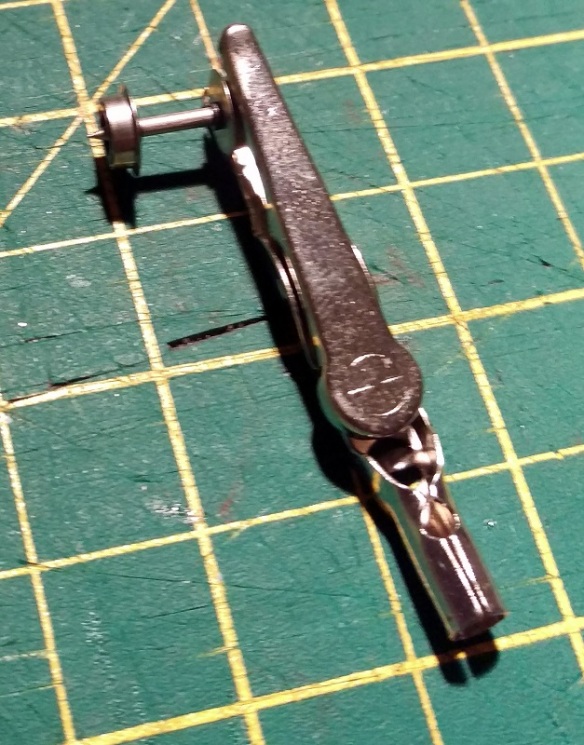 Once you are ready, and have stirred the wire glue, use a tooth pick to put a tiny amount on the axle and the inner face of wheel making sure you don’t bridge the plastic spacer with the glue.  Then using a pair of tweezers position the chip so one end touches the axle and the other touches the inside of the wheel. 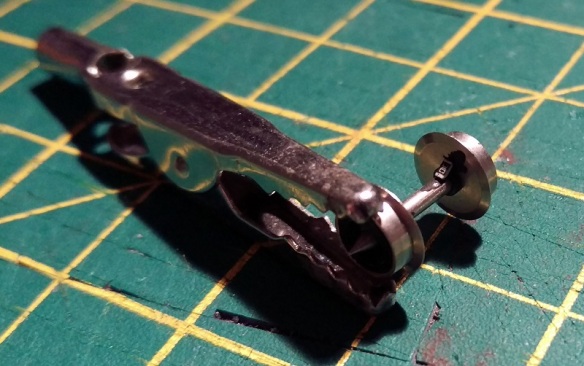 Once it has dried a little I put a bit more glue over the top to ensure everything makes contact. 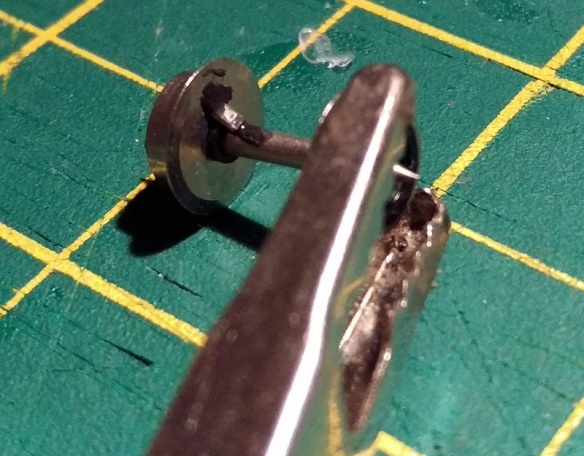 If, like this particular wheel set, both wheels have a plastic spacer you will also need to bridge the other side.  I have done this simply by spreading some of the glue across the spacer from the wheel to the axle.

Once dry you can check the resistance across the wheel set with a multi-meter.

This glue generates a fair amount of resistance itself so it would not be good for main DCC wires etc but for this purpose it does the job nicely.  I also don’t think it’s as strong as most glues so to make sure the chip won’t come off you could also put some superglue or CA over the top once you know it works okay.

Then it is a simple matter of fitting the wheel set back into the truck and the coach is ready for use on any layout and will trigger track detection on layouts with circuit detection.