This week’s post is about a replacement gear set for my C-855 model.  In particular it’s for the very early Con-Cor U50 chassis and the difference it has with later models.

The Con-Cor U50 and Turbine chassis has a centered motor powering two drive shafts.  Each drive shaft has a cup gear on the end which looks like this.

The motor has a small gear which fits inside the cup.

In the rendered image below you can see the two drive shafts either side of the motor.

My C-855 locomotives required this chassis to be extended and therefore the drive shafts as well.  In the image below you can see the white drive shaft extenders inside the extended chassis.

Up close you can see the drive shaft extender is simply a cup gear that plugs into the existing gear.  The tooth set out is the same with twenty teeth in total 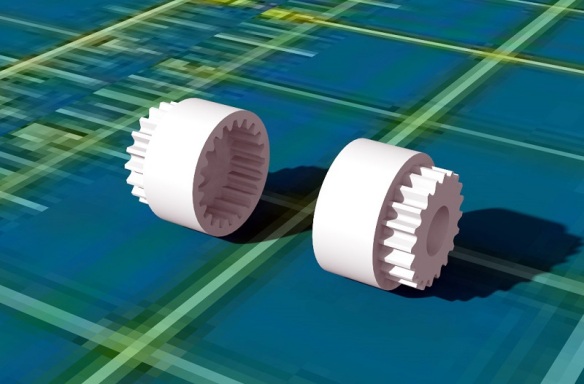 So far in all the U50 and Turbine chassis I have seen the cup gears have all been the same.  But last month I had an email from a fellow modeller who had a U50 chassis with different cup gears.  His had 26 teeth per gear.  So I searched through all the U50 chassis I had to hand and eventually found one as well.  It looks like the very first U50 batch were made by Sekisui on behalf of Kato and it is these models that have the different gears.  Both the Kato made and Con-Cor “Rail Baron” version have the same motor gear and cup gear.

So not wanting to let anybody down I have drawn a replacement cup gear extender.

The new cup gear is on the left and you can see the teeth are finer, and there are more of them.

Before I release this gear I want to do a test print and check that it really does fit the 26 tooth cup gear in the Sekisui chassis.  Then it will be available through the shop should you wish to convert your Sekisui U50 into a C-855.

Also while searching through all the chassis I noticed the gears in the trucks and worm gear are different between the Kato made chassis and Con-Cor “Rail Baron” versions so I would not recommend mixing up the trucks, I tried it and the loco run very lumpily indeed!