In this week’s post I’ve got some follow-up pictures for my 3D printed N Scale SD50 dummy chassis.  Back in November 2016 I shared with you my designs for this project and you can read that post here.  Since then I’ve ordered the chassis and trucks as a test print, which came out very well, as you can see below.

The trucks fitted well and the chassis tracked well along the rails.

However, in my eagerness to test the parts I’d forgotten that the fuel tank on Atlas’ SD50 is not the same as their C-628; which I was using as a template model.  Consequently the SD50 fuel tank was much wider and had no way of fixing to the new chassis, as you can see below.

This was easily rectified by widening the chassis and creating the required fixing points, as you can see in the computer model below.

Although this made the chassis much wider I was able to remove the unnecessary material by adding the holes and slots in the sides and base. This keeps the cost roughly the same as before; Shapeways charge by volume of material for their 3D printing service. The chassis section was then 3D printed and now it looks like this: 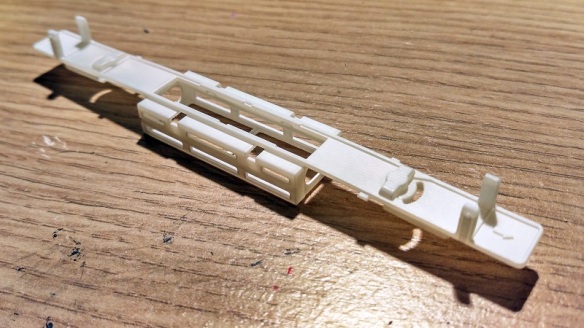 Compared to the old chassis, as shown below, you can see the significant change which needed to be made. 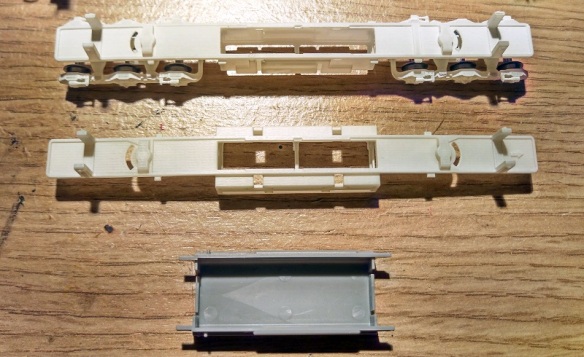 I also made some other alterations to the chassis.  I added a direction indicator to one end to mark the front; this made sense as the chassis was very similar at each end which meant I kept putting it in backwards!

Also working with the original design I discovered it had a few weak spots which I was able to strengthen by adding stiffeners or simply thickening the material at that point.

The new chassis and trucks fitted perfectly into the locomotive shell and, although they still needed to be painted and weighted, the dummy loco ran perfectly round the layout with a powered C-630.

The coupling height is spot on but the fuel tank does seem to be very close to the railhead which could cause an issue when the loco crosses a transition to an incline.  However this is easily fixed by gluing the tank to the chassis.  The tolerance in the tank fixing allows it to drop, but when glued it will sit a bit higher.  In the 3D computer model I have lifted the tank fixing up a fraction to avoid this.

I still want to do a few more tests, add some weight to the chassis and paint it to make sure everything is correct before I release the model in my shop but that won’t take long. These trucks have been used on many locomotives so I’ll also be releasing them with different length chassis to fit different shells.  If you have a specific locomotive which you need a dummy chassis for, let me know and I can do that one first.

On another note, this wasn’t the only dummy chassis in my delivery from Shapeways.

This is the considerably larger dummy chassis for an Alco C-855 and I’ll be sharing this with you in a later post once I’ve had a chance to test it out properly, but so far it’s looking very good.