This weekend I had a nice surprise when passing through Corfe Castle which is small village located in Dorset on the South coast of England.  There was a special event happening at the local heritage steam railway and I thought I would share it with you.

Corfe Castle is famous for having, as its name suggests, a large castle.

Although in ruins it’s a spectacular sight and it’s situated very close to the railway station which is now operated by the Swanage Railway; which is a heritage line.  The station is situated just to the right of the castle behind the town.  In the picture below you can see two plumes of steam, each from a different train sat in the station.  The line runs to Swanage to the right and Norden to the left passing between the castle and the far hills.

The Swanage railway runs steam trains for most of the year but what made this weekend special, and a nice suprise, was the addition of some visiting locomotives.  And they where all Bulleid light pacifics. 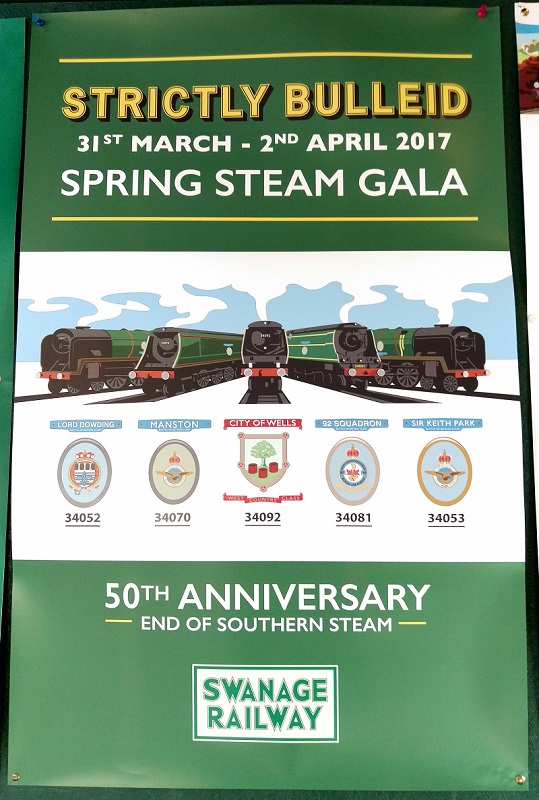 As the poster says this year, actually in July, marks the 50th year since the end of steam on the Southern Railway; which was one of the big four.  The others where the LMS (London Midland Scottish), LNER (London North Eastern Railway) & GWR (Great Western Railway).

One of the most influential people for the Southern was Oliver Bulleid. He was the chief mechanical engineer for the Southern Railway between 1937 and the 1948 nationalisation.  As all four companies competed to have the fastest and sleekest looking locomotives Bulleid designed a class of locomotives called the ‘Merchant Navy’ pacifics to pull the most prestigious trains, as pictured below.  Not only where these streamlined but they had lots of modern ideas such as chain driven valve gear and electric lights. 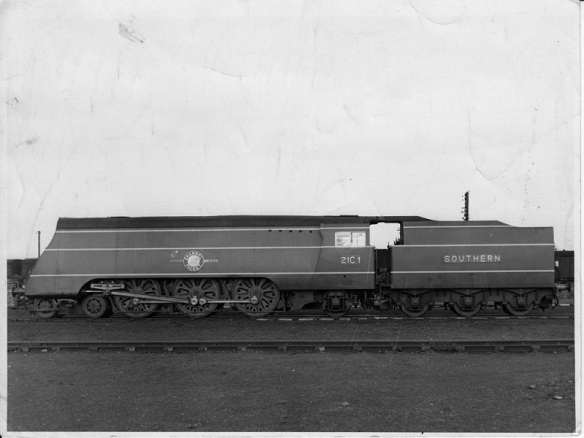 30 locomotives in the class were built between 1941 & 1949 and became know as ‘Spam Cans’ among the loco crews because of the streamlined cladding.  These weighed in at roughly 100 tonnes and although perfect for heavy express work it meant they where unable to travel on some of the regional lines on the Southern network.

To mark the 50th anniversary the Swanage Railway brought in four guests to run with their own West Country making a nice set of five:

Two of the locomotives are classed as rebuilt and have a very different appearance to the others.  This is because under British Rail (BR) all of the ‘Merchant Navy’ and 60 of the ‘West Country’ and ‘Battle of Britain’ locomotives underwent series of improvements in order to reduce the running costs and improve the performance of the locomotives.  The ‘West Country’ and ‘Battle of Britain’ locomotives went through this between 1957 and 1961 and the changes included the cladding or casing being removed and being replaced with conventional boiler cladding, the boiler pressure being reduced to 250 psi from 280 psi and the chain-driven valve gear being replaced with a modified Walschaerts valve gear which fitted both outside as well as between the frames making access much easier.  The origin chain valve gear was all between the frames inside an oil bath.

Although I didn’t travel on the trains this weekend I was able to catch a few as they passed through Corfe Castle station.

Here is ‘Manston’ arriving with the London to Paris night ferry train.  It’s a bit shorter than it would have been but you get the idea.

The real train ran from London Victoria to Dover.

Although the Swanage railway is a single track main line Corfe Castle station acts a passing point with two platforms controlled from the signal box. 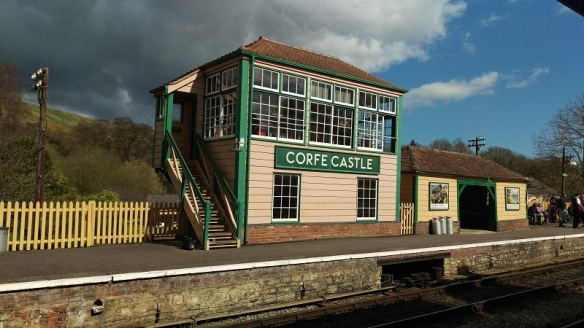 The platforms are connected with a foot bridge which was great place to watch from.

This is looking north to Norden with the Castle on the left.

And this is looking South to Swanage.  Corfe Castle station has a small good yard at the South end.

I was able to catch ‘Manston’ and ‘City of Wells’ departing in different directions after an exchange.

‘City of Wells’ was on the ‘Golden Arrow’ which was another ferry train from London to Paris but this time it was 1st class all the way.

The rebuilts do look like more traditional steam engines and I think they also look a bit larger however this is an optical illusion as they are basically the same.

‘Sir Keith Park’ (the rebuilt ‘Battle of Britain’) sits ahead of ‘92 Squadron’ awaiting the signal to depart Corfe Castle station.

Double heading was common on some of the steeper routes and is always great to see although for five coaches I don’t think these two have much to worry about.

The scenery in the area is wonderful; and can see why they built the castle here all those years ago; a good rail connection for one!

I leave you with ‘Manston’ running North in the afternoon sun.