2018 is here and after a little time off over the Christmas holiday I’m ready to get stuck back into modeling, 3D printing and generally anything train-related.  And what better way than a blog post about something I’ve been working on that you can also do.

Over the years I’ve collected many different coal cars and the only thing I don’t like about them is the identical plastic coal loads.  So this week’s post is a ‘how to’ for adding real coal loads to hopper cars.

Of course modern block coal trains do have very similar loads in the cars because they are all filled from the same place at controlled intervals and look something like this. (Photo taken by Lewis Bogaty, see his blog here)

But depending on where the load comes from will depend on the size of coal pieces as shown in the image below. (Photo from Virginia Tech Imagebase).

The shape of the load is also effected by the type of coal chute and the operator.  For me I like my coal loads to look something like the cars below; with a twin mound and a random unevenness.  These are Lionel O scale cars, and if you look closely you can see the coal loads are identical!

So what do I do?  Firstly I pick a coal to use; I’ve been using Woodland Scenics’ Mine Run coal, it’s not actually coal but looks just like it and it weighs next to nothing.

Unless the car has a load which is the right shape and set low in the car (I’ll explain what to do with those later) I remove the original load.

This would also be the best time to add any weathering to the car so it doesn’t get onto the coal load. But for this particular car I haven’t done that as it already has a grubby look.

Next I cut a piece of rectangular card which is the same size as the top the car.  It doesn’t have to be an exact fit but it wants to be snug.

The card wants to be set down from the top rim.  This has two functions, it gives me a level to work from and saves me filling the whole car with coal.

To hold it in place I use a splash of super glue on each end.  Any glue will do but I like to do this fairly quickly and superglue sets very fast.  In my previous posts you may have seen me use the Gel superglue which I normally prefer as it doesn’t run.  But today I want it to run into the gap so I’m using the regular stuff.

Next I cut a second strip of card which is thinner than the original, about half as wide.

The second strip is then cut into two pieces.  These will form the mounds, and if you want three mounds simply make them shorter and add a third.

Using my craft knife I cut the mounds at forty-five degrees to make a chamfer.

I repeat this on all four sides.  It doesn’t have to be perfect as it’s going to be covered with coal!

I then put some super glue where the mounds will be.

And place the mounds, trying to get them centered in the car. 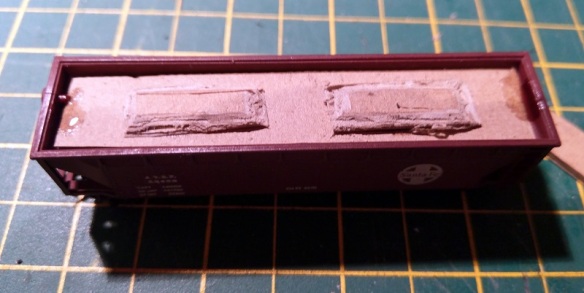 Next I use a white glue, simply placed in the car as below.  Woodland Scenics’ Scenic Cement will work or any white glue but I like to use Tacky Glue, simply because it sets quickly and speeds up the operation.

Using and old brush I spread it all over the card trying not to get any on the top edge of the car.

Then the fun bit, simply pour the coal on top.  I recommend doing this on a piece of paper so the excess coal can be picked up and reused.

After about 5 minutes, if you are using Tacky Glue, turn the car over and all the excess coal will fall off.

Pick off any bits that have stuck to the top edge before they set permanently.

If, like me, you want the mounds to be a bit higher simply add a bit  more glue to the top of the mounds.  Also if there’s a hole or gap add some glue there as well. 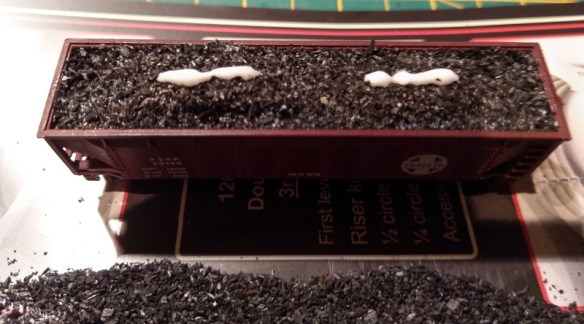 Then re-cover the car with coal. 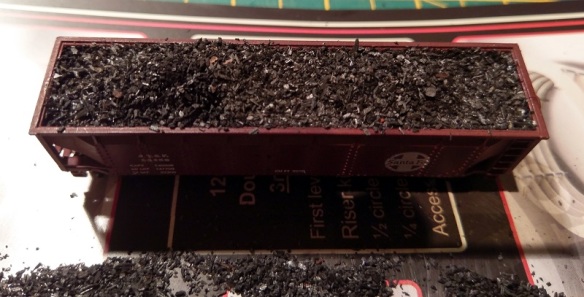 After another 5 minutes tip over again to remove the excess and you should be left with a natural-looking load of coal.

I then leave the car overnight just to make sure all the glue sets.  And the car is now ready for the railroad. 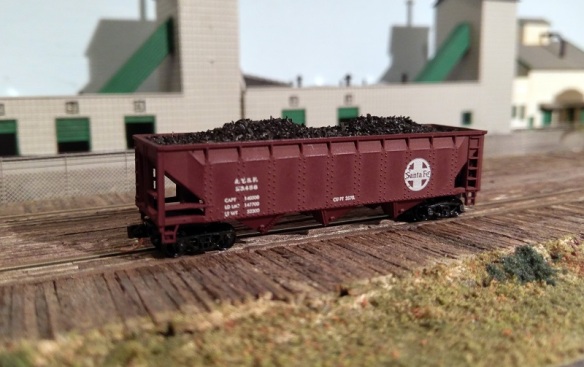 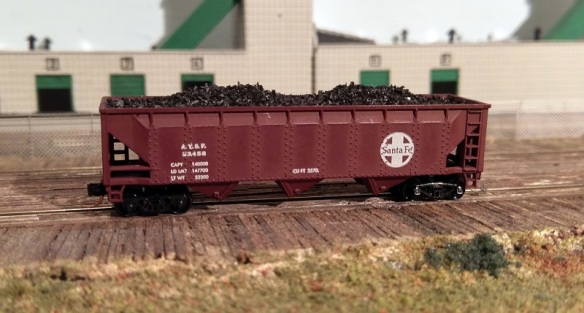 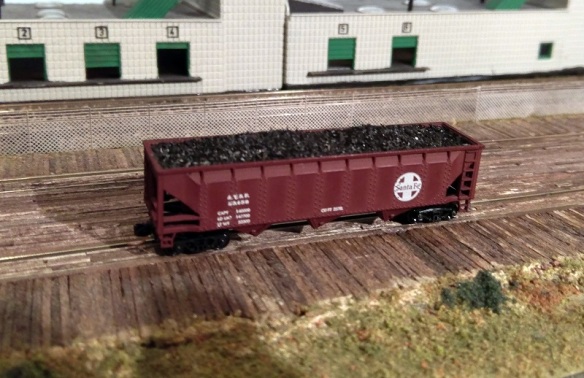 Earlier in the post I spoke about cars which have a plastic load which is the right shape and set low in the car.  When the load is set low there is room on top for extra coal without it looking over full. These are easy to do, simply cover the plastic load with white glue, again avoiding the top edge, and pour on the coal.  Even though the plastic loads will be the same shape the poured on coal will take a slightly different pattern each time.

And that’s it for the first post of 2018, I will be back next week with more. In the meantime I’d just like to wish you a great New Year and I look forward to sharing more of my train projects with you.