If you’re a regular reader of my blog you will know I try to post every week.  However last Monday I was rather ill so I ended up missing my post.  But never fear because I’m back and ready to post.  And this week, as promises two weeks ago, will be about the Great Central Railway Model Event which I attend as an exhibitor with our club layout, Solent Summit.

Now, although I said I attended the event it was a very busy weekend and given the size of the layout we took and the number of staff we had it was very difficult to get away and see the other things.  Plus as the Great Central Railway had exhibits at different stations along the line, not having the time for a train trip, I was unable to see any of those.  But the real trains where running right out side our marquee and I was able to dive out and get some pictures and video to share with you.

We were based at Quorn & Woodhouse Station which has an island platform between the tracks.  Throughout out each day three steam haled services, a diesel top and tailed service and a DMU (Diesel Multiple Unit) ran up and down the line.  And given that it’s a double main line this made for an intensive service.

The Woodhouse road crossed the North end of the station and from here I was able to capture the iconic sound of the class 37, which gave them the name ‘Growlers’, as it departed heading North.

Out of the three steam engines Standard 5 No. 73156 was the smallest, although don’t let that fool you into thinking it’s not a powerful locomotive. It has a BR (British Rail) power rating of 5MT (Mixed Traffic) and considering the scale only goes up to 9, that’s not bad. 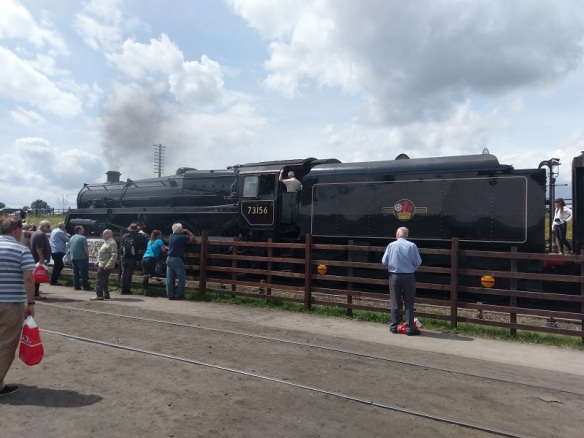 This 4-6-0, built at Doncaster in 1956, had a fantastic exhaust note and I managed to run out and catch it as it pulled out of the station heading south.

As well as the big trains the DMU was also running up and down.  The train consisted of a three car set and I believe an additional fourth power car.  Sadly I didn’t see it again to get any more shots. 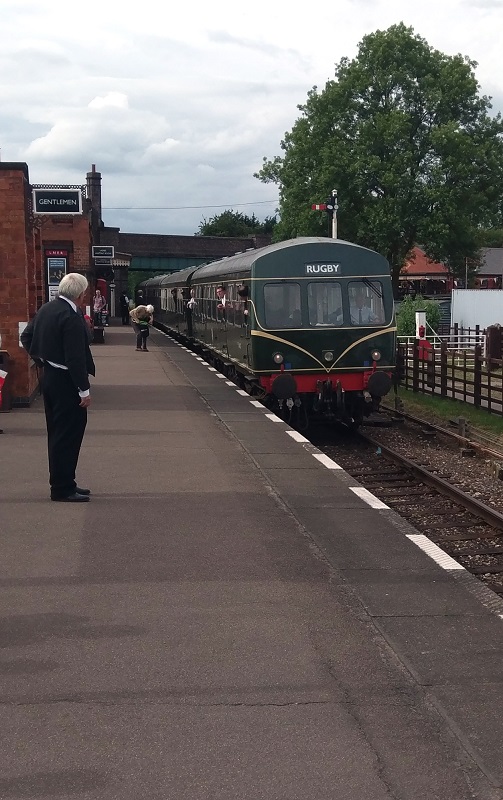 This 4-6-2 pacific class 7P (Passenger) express engine was a fantastic looking locomotive and, given that it has a main line ticket and is regally ruining main line steam specials at top speed, ran like a sewing machine.

From the other side if the line I was able to capture it coasting into the station heading North.

And again from the road bridge departing North.

The GCR does have turntables but as the line is only about 10 miles long and the locomotive are not running at speed they do the return journey in reverse.

One the Friday night the GCR put on a special train for the exhibitors so I did get a ride and it was behind none other than Oliver Cromwell.

At the southern end of the line, Leicester North, I captured Oliver Cromwell running round its train.

On the Saturday the Class 20 was still on the diesel service but the 37 had been replaced with Class 45 D123.

This locomotive was in wonderful condition and despite the distinctive diesel growls I don’t think it needed to work very hard at all to pull its train. 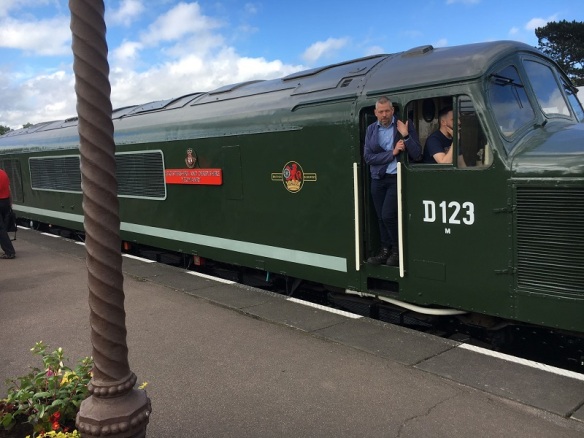 The last steam engine, and the one I most wanted to see was also was the most elusive however I did manage to catch it.  The huge (by British Standards) Class 9F 92214 ‘Leicester City’.  It was built at Swindon in October, 1959.

This 2-10-0 simply radiated power, not surprising as it was one of the most powerful steam locomotive types ever constructed in Britain, and I don’t think it even knew it had a train behind it.  Here it is departing the station heading South.

On its return it was adorned by a Bachmann name plate although I don’t think any on-board DCC sound decoder could sound that good! 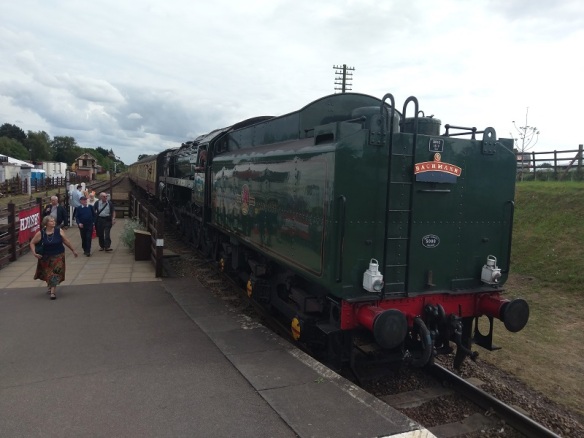 On Sunday we had our last locomotive change for the diesel service.  The class 20 was replaced by Class 25 D5185 Named ‘Castell Dinas Bran’.  It was built at Darlington in 1963. 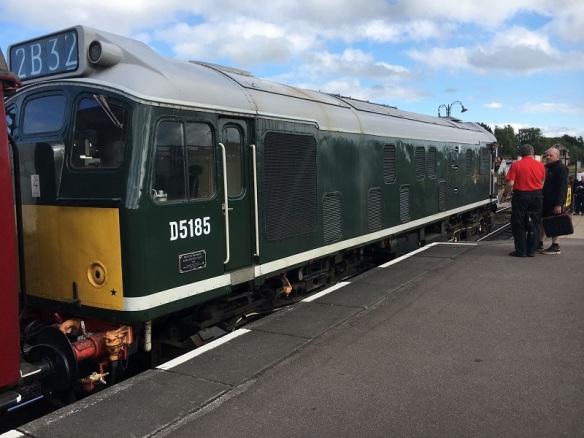 Here is the Class 25 and 45 departing the station heading South.

At the south end of Quorn and Woodhouse station is a turntable and parked on it out of the way for the weekend was part of the ‘Wind cutter’ mineral set.

The GCR has 36 of these wagons, 18 in service, and they are used to recreate fast main line freight trains. You can read more about the ‘Windcutter project’ here.

This also would have been a great spot to watch trains go by, if I had the time, but I did catch ‘Peak’ D123.

And of course what would a steam railway station be without a traction engine to hand. 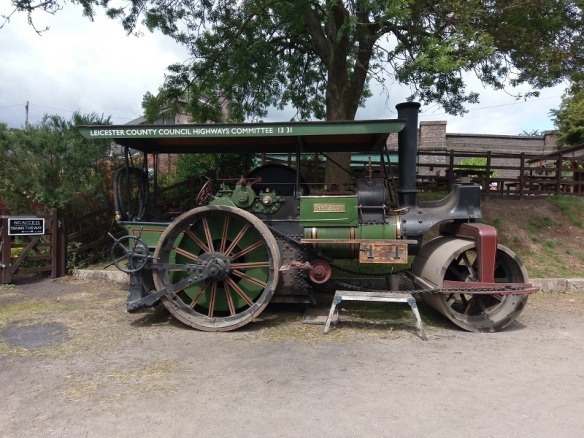 But what about the model exhibition?  In the pictures below of Quorn and Woodhouse station you can see the huge marquees behind which housed the layouts. 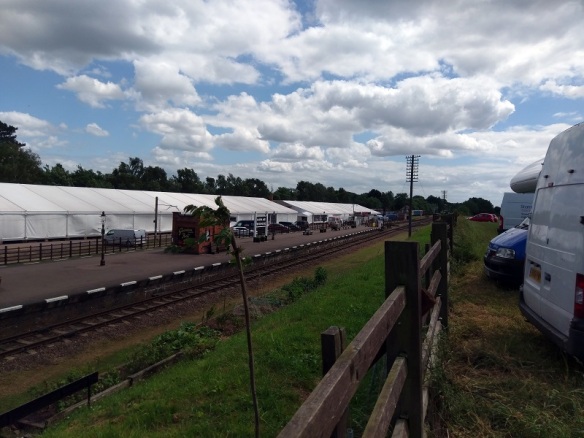 The picture below was taken from one end of one of our marquee just after we packed up to give you some idea of the size of the event. 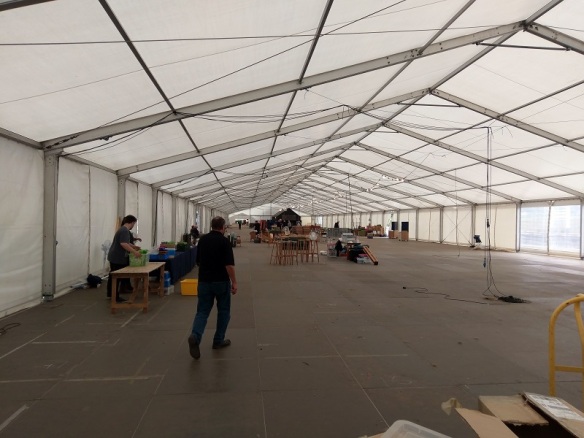 As I said before it was a busy weekend and although I did get to have a quick look around I sadly didn’t take any pictures of the other layouts, all 70 of them!

But, thanks to Paul Begg we do have lots of photos of our layout which can be found here.

He also made a great video which captured a lot of our trains including the 22′ RoadRailer train!

There are lots of great videos on YouTube covering the other layouts, one set which seems to cover most of them is listed below. (Solent Summit is in part 5).

This event was a lot of fun and it’s certainly one I would recommend going to next year.  I would like to say thanks to the Paul Begg for his photos and video, the Soar Valley Model Railway Club for organizing the exhibition and the Great Central Railway for hosting it all.  I will leave you with two more videos of Standard 5 No. 73156 and Oliver Cromwell powering out of Quorn and Woodhouse station.