This week I’m covering the next part of my step-by-step build of a set of N Scale A-B-A ready-to-run Alco C-855 locomotives.  You can find part one of the build here.  This step is all about adding the etched brass handrails and ladders.

The red stripe was created with a decal and will be finished with paint.

Because both the shell and the sand box have been painted it may be a very tight fit, so you’ll certainly want to do a test fit before you attempt to glue them on.  On the rear of the sand box is a lug which fits into the slot on the side of the shell: if the sand box doesn’t fit it could be because of the paint around the lug and gentle scraping with a craft knife will remove this. 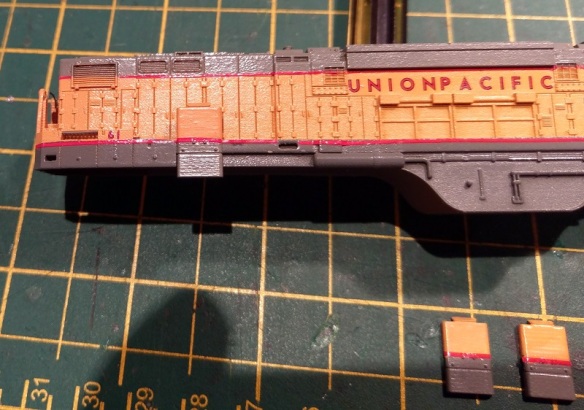 To fit the sand boxes I use a toothpick or similar to add a drop of superglue to the slot then press the sand box into place.

The sand boxes on the other side of the A unit are a mirror image.  (And yes the shell above is a different locomotive, number 61, to the one below, number 60).

The brass etch fret has six handrail sections to install as well as four ladders.

The center handrails, and the longest, have four posts which fit into the top of the sand boxes.  Both handrails are the same.

The sand boxes have square holes 3D printed in the tops to accept the handrails which not only makes it easier to get them in the right place but also makes them a lot stronger, as with the sun visor installation described in my previous post about detail parts. 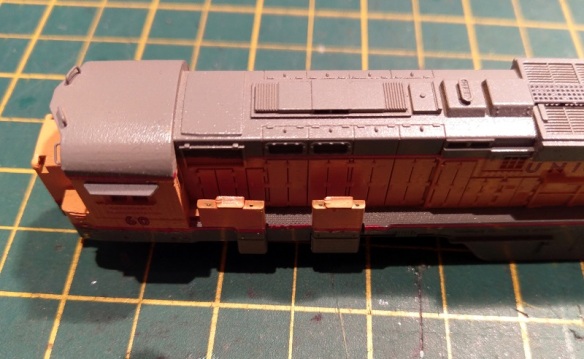 However as the sand boxes have been painted it’s possible the square holes are blocked with paint.  If that’s the case they can be opened up with a 0.4mm drill in a pin vice as shown below.  No 3D printed material needs to be removed and a few twists should cut through any paint blocking the hole.

The handrail can then be test fitted.

As both ends of the handrail are fixed by the sand boxes you may find that the handrail bows which it has done in the image below.  This could be due to several reasons such as the sand boxes being slightly too close together or the 3D printed shell may have shrunk slightly which can happen if removed from the printer too quickly.  But it’s hardly noticeable except in the handrail. In this situation I remove the handrail, dab some superglue onto the four posts and fix them into the sand boxes.  Once the glue has set I use a pair of tweezers to increase the crank next to the sandbox which will stretch out the handrail and remove the bow. 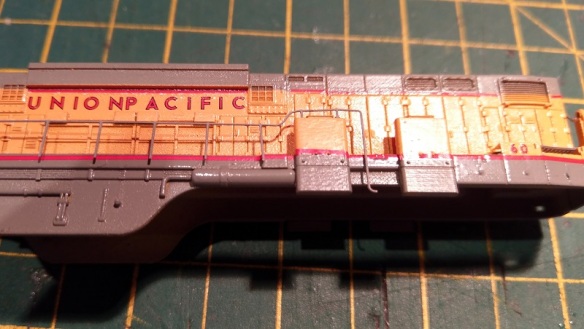 Each of the eight posts in the center of the handrail can now be glued to the shell.  I do this by dabbing a small amount of superglue under the post with the toothpick and holding in place until set.  I tend to use a small flat blade watchmaker’s screwdriver to hold them down.  The posts or handrails for the ladders are not stuck down yet to allow correct positioning of the ladders.

The next sections to be fitted are the handrails behind the cabs; the B unit doesn’t have these.  There are two in the fret and they are both the same.

As with the center handrail this part has two posts which fit into the top of the front sandbox.  There is also a square notch in the side of the cab, level with the sun visor, which the end of the handrail fits into.  With the exception of the ladder handrail section this part is glued in place, again with small amounts of superglue dabbed on with a toothpick.

The last two section are for the rear of the locomotive.  Although both parts are the same shape they are different.  Below is the left-hand side handrail as viewed from the outside.

This section of railing fits into the top of the last sand box and the other three posts have square notches in the 3D printed shell to fit into.

The very end of the handrail fits inside the lifting lug and lines up with the short section of handrail that was fitted in my last post.

The front of the B unit has the similar handrails to the rear, the difference being they are slightly longer.  So if you test fit them and the posts don’t line up vertically with the notches you have the wrong end.

Now all of the handrails are installed I fit the shell to the chassis, remembering to locate the headlight and secure with some Black Tack as described in part 11 of this build.

I fit the shell to the chassis now because the next parts to be added are the ladders and these are probably the most delicate part of the model and will be protected, to some degree, by the chassis.

The ladders are all the same but on the rear are two reduced sections.  These are not bending points but rather locating points for the handrails.  In the image below the ladder on the right is showing the rear side.

To fit the ladders I dip the top in a spot of superglue and place onto the side of the shell.  There are two locating lugs 3D printed on the shell and the ladder sits on either side of them. 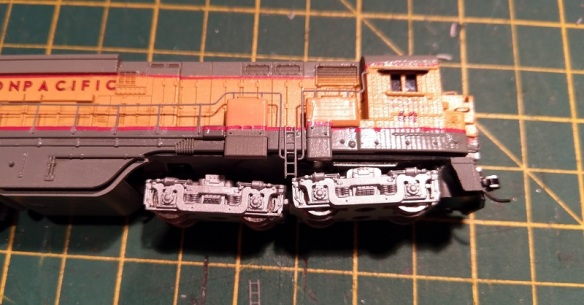 The handrails are then glued to the reduced section behind the ladder, but they can also be glued to the shell if you like.

There are a few other parts on the fret which were added to it not knowing if they were needed.  These are some Multiple Unit or MU hoses which could possibly be used on the pilots and two tiny pipes, L shaped, which were designed to go from the cylinder on the fuel tank to the pipe 3D printed on the shell.  But as the existing pilots have MU hose molded onto the original Con-Cor parts I’ve decided not to use them.  As for the tiny pipes; these would prevent the shell from being removed if installed and from experience they get knocked off so easily I’ve also decided to leave them off.  However they are there to be used if you wish.

As for the assembly of the A-B-A set, that’s now it.  I still need to do a little paint touch up.  I also want to add some blackening on the vents and grills and also the number boards need to be sorted out.  Next week I’ll have some proper photos and hopefully some video of the finished set but for now here are a few shots taken whilst their still on the work bench. 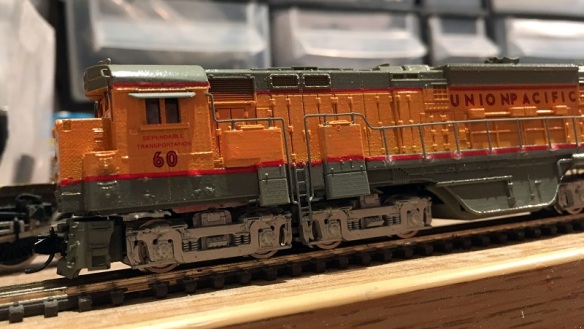 As I said, in next week’s post I’ll have some shots of the finished set to share with you.