This week will be a short post as I haven’t had a great deal of time to work on any of the current projects, but I did make some progress on the HO Baldwin DT-6-2000 body shell.

The shell from the outside, as shown below, is complete, and this is mostly due to the fact it was already drawn for the N Scale version.  The work I’ve been concentrating on is inside the shell.

Inside the shell, as well as the chassis, are lots of wires and these are often forgotten about when it comes to planning an install of a DCC decoder into a locomotive.  This loco will have sound, lights, working couplings, and maybe a stay alive capacitor as well, which will create a lot more wires and take up space.  Fortunately, being a HO scale loco there’s a good amount of space inside, but the wires can still be messy.  It can be really frustrating to get everything fitted only to find the shell won’t push down that last 1mm because of the clump of wires in the way!  So I’ve created loops for the wires to pass through which should hold them all in the right place and keep them tidy.

In the image below I’ve taken a section through the 3D model and you can see the wires running from the headlights and coupling motor up inside the shell and along the underside.

Each nose section has two loops for the coupling motor wires.  These may prove tricky to feed through, but I think it’ll be worth it and will prevent the wires from being visible through the mesh grill. It’ll also keep them away from the truck towers. 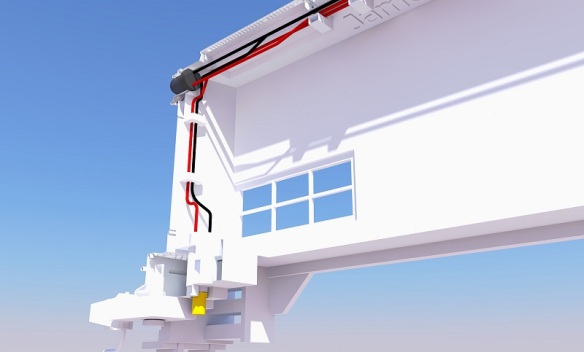 The wires then pass through three, or four, if required, loops on the underside of the shell.  I’ve allowed for more wire in case more things are added, such as number board lights or speaker wires.  The black is the common wire with the reds powering a headlight and coupling motor each.

In the middle of the loco is the cab, and the cab interior will be the same part used for the N Scale version.  My drivers, Bert and Ernie, will also be used again, one for each side.  Normally you’d be able to see through the cab to the other side, but there’ll be a DCC decoder and circuit board in the way, as represented by the green block.

Having the crew and cab interior, I think, greatly improves the appearance of the loco. I may even put a cable path in to allow a surface-mounted LED to be fitted in the cab roof.  Several HO scale locos I’ve come across have cab lights that automatically come on when the loco is not moving. 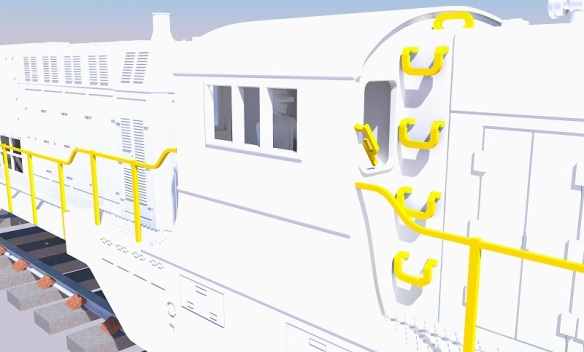 The shell is now very close to being finished, and I will get a 3D printed test model soon. There’s just a few more details I want to add and some checks to make, but then I think it’ll be ready.  I still need to draw the brass etching tool so that it can be sent off to the etchers, and I may draw in a compartment for the speaker;  I’m planning on fitting a new ESU V5 Loksound Decoder; these come with a small but powerful speaker and having a location for it to fit into will again make things tidy and easy to build.  I’ll share the final 3D model with you when complete.